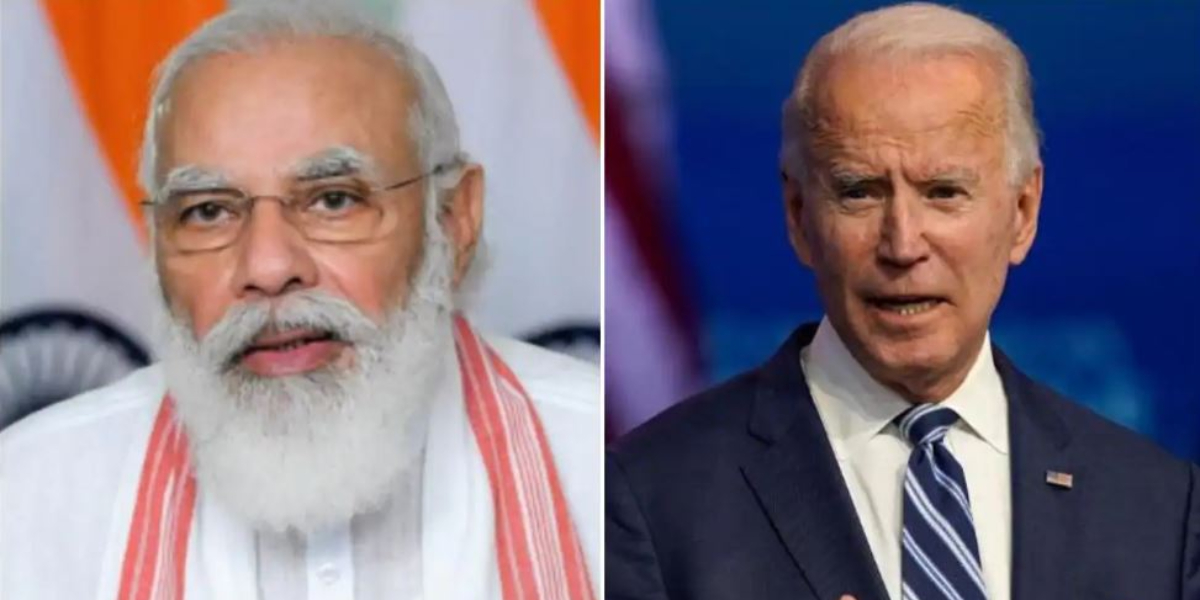 Indian Prime Minister Narendra Modi, who had cast his lot with the previous U.S President Donald Trump in his bid for reelection, met the current incumbent Joe Biden recently at Washington DC. US President Joe Biden, magnanimously, instead of sinking in Modi’s abki bar Trump Sarkar (next turn is Trump administration), spoke about the need for non-violence, tolerance and diversity in current times, while he emphasized that both countries are destined to be “stronger, closer and tighter”.

Biden’s comment marks the second time the US has spoken to Modi in public about the importance of democracy in as many days. Vice President Kamala Harris (partly of Indian origin and having leanings towards New Delhi) on the eve of the meeting said “it is imperative that we defend democratic principles and institutions within our respective countries”. These remarks come against the backdrop of growing concerns abroad over the rise in anti-Muslim rhetoric in India and curbs on dissent.

Modi was welcomed by Biden to the Oval Office in the White House on the morning of September 24 for their first face-to-face meeting since the change in US leadership. Modi had met Biden in the latter’s vice-presidential avatar during his state visit to the US in 2014. Modi’s last trip to the United States was two years ago when he and President Donald Trump attended the ‘Howdy Modi’ rally in Houston.

After Biden assumed the mantle of President of USA in January, the two leaders participated together in several virtual multilateral fora and have also spoken over the phone multiple times. After their formal bilateral talks, they took part in the first in-person of the Quad summit with leaders from Australia and Japan.

No questions were taken by either leader at the end of the 20-minute-long joint press appearance in the Oval Office, a decision reached by prior agreement. After fielding unscripted questions during his meeting in London with David Cameron in 2015, Modi has never consented to another press conference. The meeting took place in the backdrop of the “Dismantling Global Hindutva” conference, which took place in various US universities on the 20th anniversary of the 9/11 terrorist attacks, where liberals worldwide uncovered the real axis of evil—not the Taliban or Al-Qaeda, but Hindutva.

The three-day virtual Dismantling Global Hindutva conference, co-sponsored by more than 60 departments and centres from more than 45 universities, convened panels on a variety of interlinked topics that addressed the threat and power of Hindutva. Scholars, journalists, and activists examined the historical development of Hindutva, the fascist dimensions of the ideology, its alignment with other supremacist movements and defined all that is at stake across a range of political, socio-cultural, and economic issues. The organizers had invested in examining the beliefs and actions that constitute Hindutva, an ideology that propagates hate, promotes Islamophobia, and seeks to reduce the myriad practices of Hinduism to a singular notion of a Hindu motherland.

Indian media vehemently attacked the co-sponsors of the conference from universities including departments and centres at Northwestern, UC Berkeley, UChicago, Columbia, Harvard, UPenn, Princeton and Stanford. However, the conference went ahead as scheduled to expose the fanatical and radical ideology of Hindutva.

Coming back to the US president and Indian PM meeting, Biden began with the boilerplate observation that the relationship between India and US, “the largest democracies in the world, is destined to be stronger, closer and tighter, and I think it can benefit the whole world”.

He claimed that a “new chapter” in the history of US-Indian ties has been launched with both countries “taking on some of the toughest challenges we face together, starting with a shared commitment to ending the Covid pandemic”.

Along with talking of democratic values, Biden also mentioned the need for tolerance, although he couched his advice to Modi by noting that Gandhi Jayanti was next month. “As the world celebrates Mahatma Gandhi’s birthday next week, we’re all reminded that his message of nonviolence, respect, tolerance matters today maybe more than it ever has,” he said.

Opinion makers around the globe took note of Biden’s chastisement of Modi on his government’s questionable track record pertaining to crimes against humanity. The Kashmiris in Indian Held Kashmir and the minorities in India are suffering at the hands of the BJP government through draconian laws like the Citizenship Amendment Act (CAA), National Register of Citizens (NRC) and the National Population Register (NPR), which have questioned the citizenship of Indian minorities. On August 5, 2019, the BJP government rescinded articles 370 and 35A of the Indian Constitution, amalgamating, Jammu-Kashmir and Ladakh into the Indian Territory, enslaving the Kashmiris.

The Indian foreign secretary Harsh Vardhan Shringla, touched to the quick, tried to deny that Biden’s emphasis on tolerance and democracy was a rebuke to India.

The fact remains that the US may consider India to be a huge market for US products including defence equipment and the efficacy of using India as a bulwark against China, but India’s crimes against humanity cannot be hidden under the carpet. The protest rallies all over the US by Kashmiris and Sikhs were an exposé of Modi’s harsh policies against Indian minorities.

Saudi economy to grow 7.3% next year

Will Smith shares an update on his fitness regimen

Will Smith has been working hard in the gym, and his efforts...

New Jersey team rescued a dog trapped inside the cave

A rescue crew from New Jersey went down a rocky crack inside...

KABUL: A grenade was thrown at a Taliban vehicle in the Afghan...