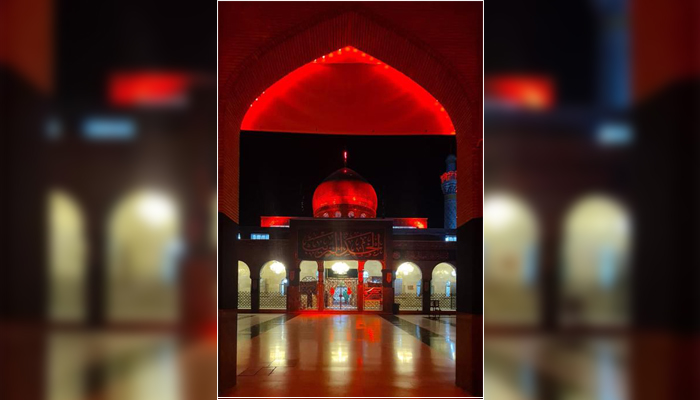 The pilgrimage to Syria is of great importance for Zaireen (pilgrims) on the Chehlum of Imam Hussain and especially for the people of the Indo-Pak subcontinent because in this part of the world usually the condolences (pursa) of brothers is given to sisters. Instead of visiting Iraq, I prefer to visit Syria on the Chehlum for the last ten years. Even during the worsening law and order situation, I did not stop visiting Syria through different routes including Lebanon and Qatar.

The sunrise of September 24 saw me heading barefoot to the airport to travel to Syria for my annual pilgrimage. Many mourners were already present in the form of groups like Karwan-e-Ali Haq and Khudam-e-Zaireen. While waiting for our PIA flight to Damascus, we started reciting nohas (elegy depicting the tragedy of Iman Hassan and Imam Hussain at Karbala) and doing matam (beating of the chest) with heavy hearts and wet eyes. During the flight, the pilot also recited marsiya (a mourning poem written to commemorate the martyrdom of Imam Hassan and Iman Hussain) and paid homage to Bibi Sayyida Zainab, the granddaughter of Holy Prophet.

In Damascus, we visited the Holy Shrine of Bibi Sayyida Zainab beating our chests in grief, sorrow, regret. At 10:30pm the Haram (Roza) was closed due to the law-and-order situation. I preferred to sit on the road outside the Haram from where I could see it and stayed there till 6am the next morning. Those seven hours which I spent outside the Haram throughout my stay at Syria greatly enhanced my spirituality and I felt less burdened.

In the morning the famous Noha Khwan group Chakwal Party reached the haram and did nohakhwani while mourners did matam for two hours. In the afternoon, we boarded buses to visit the Roza of Sayyida Ruqqiya, the beloved four-year-old daughter of Imam Hussain.  The next day we visited the dungeons of Yazid where he kept the family of Prophet Muhammad (peace be upon him). We witnessed the miracle happening in the dungeons of Bibi Sakina, 4-year-old daughter of Imam Hussain, who yearned for water. Water appeared from nowhere as if paying tribute.

The next day a group of about 200 mourners led by Syed Tossif Haider Abidi from Germany and Syed Ali Raza Bukhari from Lahore visited the grave of Sayyida Fizza where mourners did matam while reciting nohas. Thousands of mourners travelled on foot to Ras-ul-Shohda (a place where the beheaded heads of Shohda-e-Karbala (Martyrs of Karbala) were washed and kept and the grave of Sayyida Ruqqiya Bint Ali and offered condolences.

On the eve of Arbaeen of Imam Hussain, pilgrims from several countries gathered to pay condolences to Bibi Zainab. A paralysed boy was brought in a wheelchair and was bound to the Zarih (lattice barrier of grave) of Bibi Zainab. After some time, the boy stood up and the whole Haram echoed with slogans of Labaik Ya Zainab and Labaik Ya Hussain.

A Pakistani group led by Mujahid Shah (Karwan e Habib) of around 600 mourners reached Syria from Karbala and Najaf as over 19 million people participated in the walk of peace from Najaf to Karbala. Hundreds of thousands of people used to visit Syria on Chehlum of Imam Hussain till 2013 and on Ashura they used to visit Karbala and Najaf in Iraq. But when the law-and-order situation worsened in Syria they started going to Iraq.

Since the security situation has improved, next year more pilgrims are expected to visit Syria instead of Karbala. The pilgrims in Iraq and other countries walk from one destination to another to express their love for Imam Hussain. This walk also commemorates the walk of Bibi Zainab from Syria to Karbala upon her return from Yazid’s prison.

Fatima Mehdi, one of the pilgrims who reached Syria from Karbala said that in Iraq people start this journey by foot from different cities to Karbala around Arbaeen. She said that usually people walked from Basra, Baghdad, and Najaf e Ashraf to Karbala. “The journey is made easy by the hosts for the pilgrims as they provide free food, water, tea, sleeping and other arrangements. The distance from Najaf to Iraq is around 80km. There are 1450 poles at a distance of 50 meters each, that is 20 poles are equal to one kilometer.

Starting from Hazrat Ali’s haram, we walked towards Karbala. There were several mokabs (resting places for pilgrims) on each side of the road, providing free food and shelter to pilgrims. These mokabs are run by people from India, Pakistan, Lebanon, Iraq etc. Nowhere in the world will we find such devotion. The locals feed the pilgrims and feel proud to serve them. From providing food and drinks to massage and medical aid, everything is available a step away.

The presence of thousands of pilgrims walking together reciting slogans of Labaik ya Hussain and Labbaik ya Abbas and Labbaik ya Zainab makes the atmosphere spiritually uplifting. We walked a few poles, then decided to rest for a few minutes. Our hosts, the residents of Iraq, were quick to help us to sit on sofas and chairs. They offered us tea, coffee and drinks. We walked a few kilometres and when we had dinner, we were served rice and fish.

We walked all night and after fajar when we slept some of us had blisters on our feet. The mokab provided us with first aid and bandaged our feet after cleaning and piercing the blisters. Some pilgrims also received massage and pedicure treatments for free. We slept till afternoon during the day and started walking again. We walked during the night and slept during the day. Some of us who were unable to walk anymore took taxis from the main road to Karbala.”

During the pilgrimage, there was a palpable sadness in the air despite the Karbala tragedy taking place 1400 years ago. We offered condolences to Bibi Zainab on the martyrdom of her family by doing matam, zanjeer zani (hitting oneself with chains studded with five knives) and qama zani (beating head with swords). One of the caretakers of Bibi Zainab’s shrine shared that Daesh tried to attack the shrine, but it is a miracle that no rocket launcher hit the shrine.

The pilgrimage was an amazing and fulfilling spiritual experience. The pilgrims are grateful that Syrian President Bashar ul Assad made it possible for zaireen to visit the shrine of Bibi Zainab on her brother’s Chehlum.

The best time for me during my pilgrimage was the time that I spent alone outside the haram at night. During this time, I had a heart-to-heart conversation with Sayyida Bibi Zainab. Although I did not pray for any worldly possession, but I do believe that she knows what I want and blesses me with that.

KARACHI: The Union of Small and Medium Enterprises (Unisame) has urged Federal...