The top military brass extended full support to “government’s rejection of rejections of Indian actions regarding Kashmir” and reaffirmed that it is “prepared and shall go to any extent to fulfill” its “obligations [to the Kashmiri people]”, the Inter-Services Public Relations (ISPR) Director General Major General Asif Ghafoor said. 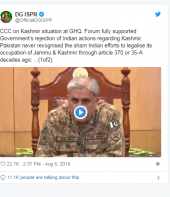 The meeting, which was chaired by the Chief of the Army Staff (COAS) General Qamar Javed Bajwa reiterated that “Pakistan never recognized the sham Indian efforts to legalize its occupation of Jammu & Kashmir through article 370 or 35-A decades ago, efforts which have now been revoked by India itself”.

The conference was summoned after India illegally ended occupied Kashmir’s special status by abrogating Article 35A and Article 370 through a rushed presidential decree on Monday.

The conference deliberated on the consequences that the whole region will suffer after the move by New Delhi.

The conference also devised strategy following the Indian army’s move to hit civilians with lethal cluster bombs along the Line of Control (LoC) in addition to discussing the internal and external security situation of Pakistan.

Markets, Shops To Reopen From May 17: NCOC

The National Command and Operations Center (NCOC) has decided to allow all...

Inter-provincial, Inter-city transport to resume from May 16

The National Command and Operation Centre (NCOC) has on Saturday announces to resume...