Political parties in their response to Indian aggression in occupied Kashmir and use of cluster bombs on civilians said that the state terrorism of India must be exposed globally with unity.

PTI leader Asad Umer said India seems to have been emboldened by world silence even as it increased its ruthless suppression of innocent Kashmiri civilians. 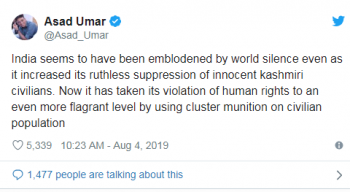 Now it has taken its violation of human rights to an even more flagrant level by using cluster bombs on civilian population, he said.

He further said that the world should have taken notice of the reckless Indian behavior in the cowardly attack in the dark of the night in Balakot.

Seems India has not learnt anything from its humiliation post Balakot and is planning another misadventure in Kashmir, Asad Umer said.

Earthquake tremors were felt in Mirpur Azad Kashmir and adjoining areas on...

On the annual International Women's Day, Google pays tribute to all the...