Pakistan Police over the years has proved to be a strong professional force: COAS

Chief of Army Staff (COAS) General Qamar Javed Bajwa has paid homage to the martyrs of Pakistan Police and their families in his message on the occasion of Police Martyrs Day being observed today. 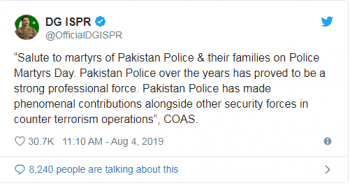 Pakistan Police over the years has proved to be a strong professional force.

“Salute to martyrs of Pakistan Police & their families on Police Martyrs Day. Pakistan Police over the years has proved to be a strong professional force. Pakistan Police has made phenomenal contributions alongside other security forces in counter terrorism operations”, COAS.

Police Martyrs Day aims to honor brave fighters of the nation and express solidarity with their families.

The police department is honoring the sacrifices of ‘Jawans’ who laid down their lives for the country while performing their duties.

The Martyrs Day was observed for the fourth consecutive year on the death anniversary of Shaheed Safwat Ghayur, the commandant of Frontier Constabulary Khyber Pakhtunkhwa Police who was martyred in a suicide attack on his vehicle on August 4, 2010.

The Pakistan Air Force has released a new national anthem to pay...

The Sri Lankan government on Thursday reversed an order to cremated the...

At least seventeen Indian fishermen were arrested and their three boats confiscated...

Peshawar Zalmi won by 3 wickets in a thrilling way against Quetta...