Prime Minister Imran Khan on Monday stated that the federal government was drafting a comprehensive package for Karachi in the aftermath of the havoc wreaked by the torrential downpour.

The package is meant to eradicate decades of neglect and suffering of the people of the port city.

The premier further instructed all MNAs and MPAs in Karachi to remain in their constituencies throughout Eid-ul-Adha and Independence Day holidays to provide for any contingencies that may arise. 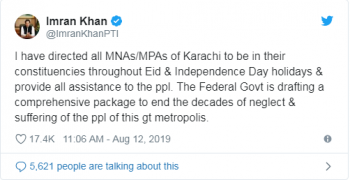 Large parts of the city, including almost all major thoroughfares, remained inundated as civic authorities struggled to drain out water that had collected over hours of overnight rain.

Contingents of the Pakistan Army and Sindh Rangers had been called in for rescue operations.

Mayor Waseem Akhtar on August 11 called for a state of emergency to be declared in Karachi.

Following the collapse in the metropolis, the mayor rebuked the provincial government and held the Pakistan People’s Party (PPP) for the abject conditions of the city.

Power supply remained suspended in multiple areas of the city over the last two days.

Early on Sunday morning, Karachi’s power utility, K-Electric (KE), urged the city administration to declare a state of emergency to deal with the post-rain situation.

It also announced that electricity supply was suspended in certain areas of the city owing to fears of urban flooding.

A ship carrying tons of imported sugar had arrived in Karachi on...

Prime Minister Imran Khan sheds light on a quote said by a...

A detailed Traffic plan for the processions of 12th Rabi-ul-Awwal has been...

Saudi Arabia has announced to end the Kafala system and replace it...

Pakistan Vs Zimbabwe: Squad for the first ODI announced

Pakistan Cricket Board has announced a 15-member squad for the first ODI...