Matters pertaining to peace and security in the region were discussed in the meeting.

Both Foreign Ministers agreed to continue consultations on changing situation of the region.

Moreover, FM Qureshi meets Patricia Scotland, a British politician and barrister who served in ministerial positions within the UK Government, most notably as the Attorney General for England and Wales and Advocate General for Northern Ireland. 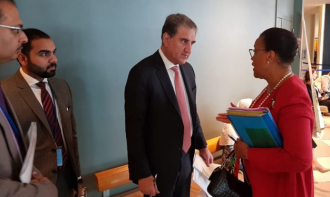 Both the leaders discussed the current Kashmir situations and worldly environmental issues.

PM said that the previous governments failed to find a solution to Pakistan’s economic problems due to this the current government had to rely on the International Monetary Fund (IMF).

The prime minister said that when his party came into power, the economic condition of the country was deteriorated and China was the first country who helped us.

He further said that the America had left Pakistan alone after the Russia (former Soviet Union) was withdrawing from Afghanistan.

The current USD to SAR exchange rate is shown below. You can...

In today’s currency market, the exchange rate between QAR and PKR is RS 44.59.Compare live interbank...