Prime Minister Imran Khan met with Prime Minister of New Zealand Jacinda Ardern on Tuesday at the sidelines of 74th Session of the UNGA at New York.

During the meeting, they discussed the challenge of anti-Muslim sentiment and Islamophobia.

During the meeting, matters related to bilateral relations and regional development came under discussion. 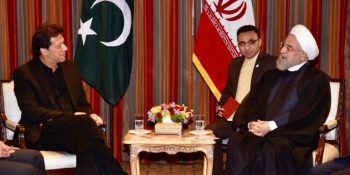 The Prime Minister also discussed the current situation in Indian occupied Jammu and Kashmir created by India‘s unilateral and illegal actions that pose a grave risk to regional peace and security.

During the meeting Pakistan’s economic situation came under the discussion.

He briefed Tayyip Erdogan on the sidelines of 74th session of the UN General Assembly in New York.

He emphasized that the dire human rights and humanitarian situation in Occupied Kashmir posed grave risks for peace and security in the region.

Imran Khan has called for the immediate lifting of all restrictions including the curfew, release of all prisoners, stop in the use of pellet guns, and respect for the human rights of Kashmiri people.

He talked to his Italian Counterpart Giuseppe Conte in New York today.

PM briefed the Italian Prime Minister on the legal, humanitarian and peace and security dimensions of the situation in occupied Jammu and Kashmir.

He also underlined the importance of the international community acting urgently to ward off threats to peace and security and facilitate peaceful resolution of the dispute in Jammu and Kashmir.

Imran Khan also met the President of the Federal Republic of Ethiopia, Mrs. Sahle-Work Zewde on the sidelines of the United Nations General Assembly (UNGA) sessions. 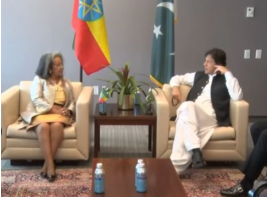 Both dignitaries discussed various measures to further enhance the bilateral relations among the countries.

As per his schedule for today, he first participated in the opening ceremony of the general debate of the UNGA session.