Pakistan and Turkey have agreed to continue joint efforts for peace and stability in the region.

The concurrence was made during a meeting between Foreign Minister Shah Mahmood Qureshi and his Turkish counterpart Mevlüt Çavusoglu on the sidelines of the 74th Session of UN General Assembly in New York.

Shah Mahmood Qureshi said the way Turkish President Recep Tayyip Erdogan has raised voice against Indian atrocities in Occupied Kashmir at the forum of UN General Assembly, has given encouragement to oppressed Kashmiris.

He also thanked his Turkish counterpart on overwhelming support of his country in the issuance of joint declaration on Occupied Jammu and Kashmir in the meeting of OIC Contact Group. 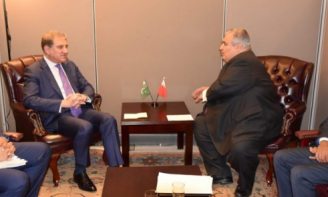 Deteriorating situation in occupied Kashmir, inhuman curfew, humanitarian crisis, brutalities of Indian troops in the held valley and other issues were discussed in the meeting, said sources.

Speaking on the occasion, FM Qureshi said that lockdown and curfew entered 53rd day today in occupied Kashmir and added that humanitarian crises deepening in the held valley.

He said that Kashmiris were facing shortage of life-saving medicines and food items.

The foreign minister said that Indian troops were subjecting Kashmiri youth and children to severe torture after kidnapping them from their houses in the held valley.

He said that India wanted to change the demography of occupied Kashmir by revoking its special status. The foreign minister said that Pakistani nation and Kashmiris had rejected the India’s August 5 decision.