During the meeting, they discussed defense cooperation and matters of mutual interest. 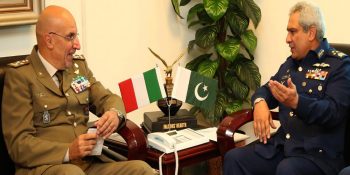 General Nicolo Falsaperna pays homage to the martyrs of the Pak Air Force.

Italian secretary general meets the Chief of Air Staff, both of them considered professional interest and mutual support.

Aziz ur Rehman Confesses To Crime In Student Abuse Case

Aziz-ur-Rehman confessed to the crime during interrogation in a student abuse case...

Concerned over reports of a shortage of coronavirus vaccine in several parts...