A giant Chinese group has showed keen interest of cooperation in the energy sector of Pakistan.

According to details, Prime Minister Imran Khan met Chairman of China Gezhouba Group after his arrival in China for a three-day visit.

China Gezhouba Group Corporation (CGGC), which was Founded in 1970, is one of the most competitive companies with very strong financing capabilities.

As a transnational operation enterprise with the fastest growth in China, the group has expanded its business in more than 100 countries and regions. 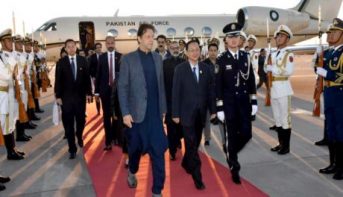 During his October 8-9 visit to China, Prime Minister Imran will meet with President Xi Jinping and Premier Li Keqiang in Beijing to discuss the security situation in the disputed region of Kashmir as well as economic ties.