PM Imran meets The Duke and Duchess of Cambridge

According to the details, the British Royal couple were scheduled to meet PM Imran and President Arif Alvi, whereas Imran Khan will also give a dinner in honor of the royal couple. 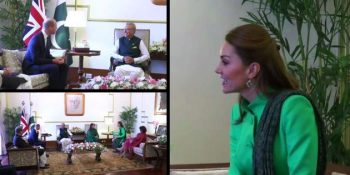 Prince William and Kate will meet President Alvi at 12 PM (afternoon) and to meet PM at around 1 PM, sources said.

During their visit, the British couple will also visit a school on October 15 and they will also attend a welfare program today.

Earlier, the royal couple at Girls’ High School Islamabad got merged with girls and reviewed different areas of the school.

The couple inspects math class at the school, whereas the school administration also briefed them about the education system in Pakistan.

On Monday night, Prince William and his wife, Kate Middleton had reached Pakistan on a five-day official visit at Islamabad airport.

On their arrival at the airport, the royal couple were given a red carpet welcome and the security forces’ squad presented a guard of honor to them.

The children dressed in traditional attire presented a bouquet to the Duke and Duchess of Cambridge.