Cabinet Division Secretariat has issued a notification, on Tuesday in this regard. 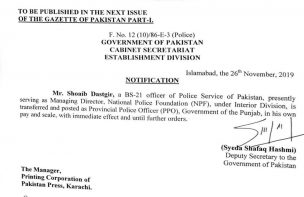 Shoaib Dastagir had earlier served as IG of Azad Jammu and Kashmir and is considered a competent administrator and policeman.

This is the fifth time the government changed the police chief of the province since it assumed power last year.

Earlier today, establishment division had issued a notification for the appointment of Major (r) Azam Suleman as the new chief secretary of Punjab.

Other changes are also expected to occur within the Punjab bureaucracy as new appointments and transfers are being considered by the government.

Prime Minister Imran Khan is reportedly not happy with the bureaucracy, especially in Punjab, and has given an approval to transfer over a hundred officers serving in Punjab, Khyber Pakhtunkhwa and Centre.

The federal government has prepared a comprehensive strategy to bring more retailers...

The Flour Mills Association has warned that if the annual turnover tax...

Lina Khan: Pakistani-American Picked Up For Top Post In US

US President Joe Biden has nominated American-Pakistani Lina Khan to head the...