A 31-feet-long Bryde’s whale was found dead at a remote rocky shore near Gunz, along Baluchistan coast on Friday.

According to fishermen, the live specimen was found entangled in a fishing net, offshore Daran on 26 November, 2019.

They tried to disentangle the animal but could not succeed as it was very gigantic and aggressive, therefore they abandoned the rescue operation. On report of the incident, WWF-Pakistan’s team reached the spot but could not find the animal.

Later, it carried out a search operation in waters along Gwadar and the Iranian border and after continuous efforts for four days, finally located the whale lying dead on an isolated rocky beach called Chill in the west of Gunz, Jiwani.

WWF-Pakistan’s team recorded photographic evidence, collected biometric information as well as samples of the whale’s tissue for analysis. The specimen was identified as a Bryde’s whale (Balaenoptera brydei), which is one of three baleen whales reported from Pakistani waters. 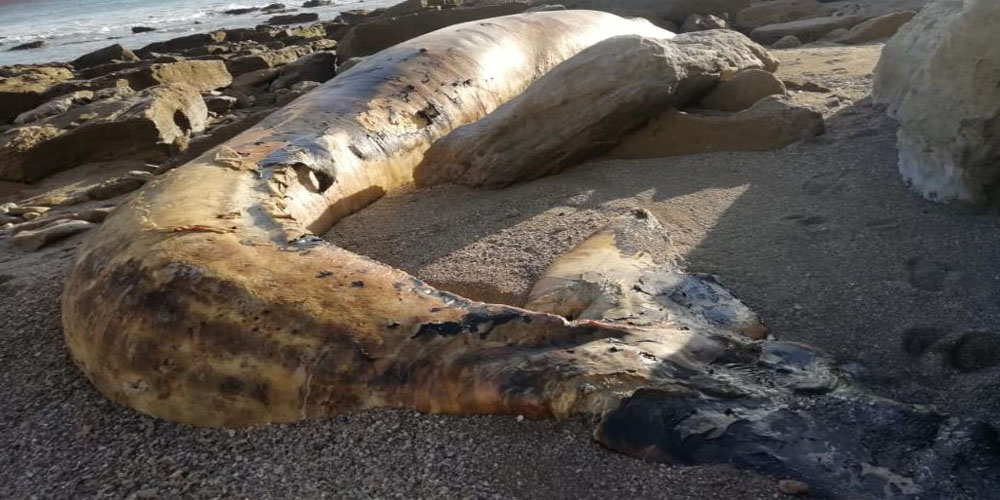 The other two are the Blue whale and Arabian humpback whale. According to Sudhair Baloch, Coordinator, WWF-Pakistan based in Jiwani, the whale became entangled in gillnet deployed by fishers to catch Indian mackerel in the offshore waters near Gunz.

Muhammad Moazzam Khan, Technical Advisor, WWF-Pakistan expressed grief over the accidental mortality of the Bryde’s whale and termed it a grave concern for conservation community around the world.

He shared that the Bryde’s whale is one of small baleen whales known to be distributed in tropical and subtropical waters worldwide.

Khan emphasized that although, this whale is categorized as species of ‘least concern’ but taking into consideration its very small population in Pakistani waters, urgent steps are required for its conservation. ‘Currently, all cetaceans including whales and dolphins are protected under the fisheries legislation of Sindh and Baluchistan’, he added.

Umar Gul, Quetta Gladiators bowling coach told that they are one pacer...

KARACHI: The (SBP) central bank has proposed changes in the foreign exchange...

KARACHI: The federal government has increased the income tax rate to 15...