According to the details. Prime Minister Imran khan is on official visit to Saudi Arabia and he started his engagements after offering Nawafil in the holy mosque of Madina Munawwara.

Earlier on his arrival, The Prime Minister was received by Deputy Governor of Madina and Consul General of Pakistan in Jeddah Khalid Majeed.

On his visit to the holy site, officials of Saudi protocol and officers of Pakistan Consulate were also present. 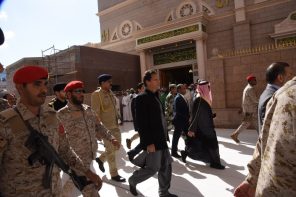 The Prime Minister will now leave for Riyadh for his official engagements.

During his visit, PM Imran Khan will discuss issues related to mutual interest between both brotherly Islamic countries.

It is pertinent to mention here that PM Imran also visited to the country in October, the premier met Saudi King Salman bin Abdulaziz Al Saud is a bid to ease tensions between Tehran and Riyadh.

Three days earlier, Foreign Minister  of Pakistan Shah Mehmood Qureshi also gave a  brief visit to Saudi Arabia, where he  hold meetings with his Saudi counterpart as well as other important leaders.

Bilateral ties and important regional issues including the ongoing Indian brutalities in Occupied Kashmir were discussed during the meetings.

Earlier in a day, FM Qureshi addressed the 8th Ministerial meeting of the Heart of Asia in Istanbul, Turkey.

Information Minister Fawad Chaudhry has said that Pakistan has not been able...

A key virtual meeting of the Financial Action Task Force (FATF), an...

Three Students Killed By A Speeding Trailer In Layyah District

Three students were killed when a speeding trailer ran over them in...

Denis Shapovalov, the Canadian tennis player, has announced to quit from Tokyo...

WhatsApp Soon To Roll Out ‘View Once’ Feature For Pictures, Videos

WhatsApp will release a feature that allows you to send photos and...