Prime Minister Imran Khan has become the fifth most influential world leader on Twitter, according to a latest report released by the ranking site, Twiplomacy.

These rankings are based on average tweets/retweet interactions on the website.

PM Imran’s Twitter following has grown at a rapid pace in the past few months.

On Human Rights day we must appeal to the world's conscience, to upholders of international law & to the UNSC to act against the illegal annexation of IOJK by the Indian Occupation govt. We condemn the Occupying Indian govt's siege of IOJK ongoing for over 4 months now & demand

In October this year, the former-cricketer-turned-politician achieved another milestone as he reached sixth spot in the list of most followed world leader on the social media platform with 10.5 million followers.

Currently, the prime minister has 10.7 million followers on Twitter.

As per the breakdown, the prime minister has the following rankings on different social media platforms. 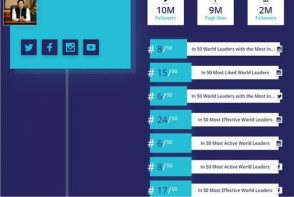 Prime Minister Imran Khan once again instructed Defence Minister Parvez Khattak to rope in the opposition and the allied parties over issues related to the extension of Army Chief General Qamar Javed Bajwa’s office term and appointment of the chief election commissioner (CEC).

PM Imran Khan chaired the meeting which was called to discuss extension to Army Chief’s tenure and the CEC’s appointment.

The premier issued directives to contact the opposition parties concerning the two matters.

According to sources, PM Khan told the government officials to quickly start the legislation process for extension to the army chief’s office term and complete it within the timeframe specified by the Supreme Court of Pakistan.

Tasking Khattak to meet leaders of the opposition parties, the premier directed him to pave the way for the legislation in consultation with them.

PM Imran Khan conveyed the hope that Pakistan will become polio-free the...

JEDDAH: Pakistan Embassy in Saudi Arabia is extending maximum facilitation to the...