Foreign Minister Shah Mahmood Qureshi on Monday, underscored the need for achieving the goal of a secure and stable Afghanistan for the economic progress and prosperity of the entire region.

He made these remarks while addressing the 8th Ministerial meeting of the Heart of Asia-Istanbul Process held earlier today at Istanbul.

Speaking on the occasion, FM Qureshi said that neither any nation could claim to have stronger and more historic bonds with Afghanistan nor any country was more desirous of peace, stability and prosperity in Afghanistan than Pakistan.

He added that Pakistan continued to host over 3 million Afghan refugees for the last four decades, and had been playing a critical role for the development and reconstruction of Afghanistan, including by committing over US$ 1 billion in development assistance. 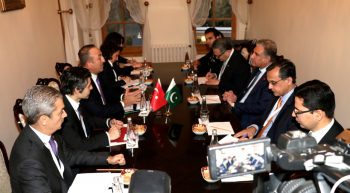 He highlighted the importance of the Afghanistan-Pakistan Action Plan for Peace and Solidarity (APAPPS) as an important institutional framework in strengthening bilateral relations between the two sides.

The Foreign Minister underlined that recent resumption of efforts for reaching peace and stability in Afghanistan was a positive development, and expressed Pakistan’s wish to see the peace process lead to inclusive intra-Afghan negotiations.

At the same time, he cautioned against the “spoilers” in view of their vested interests.

The Foreign Minister also called on H.E. President Recep Tayyip Erdogan on the side-lines of the meeting.

Reiterating the historic and fraternal relations between the two countries, Foreign Minister Qureshi conveyed the warmest and sincerest wishes for the people and the Government of Turkey on behalf of Pakistan on the occasion. 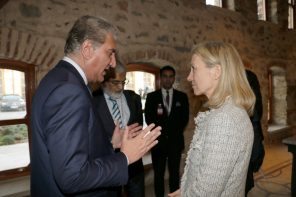 During the meeting, the two sides expressed their desire to continue expanding their relations to new areas of mutual interest, in particular by expanding bilateral economic relations.

FM Qureshi also held a brief interaction with the Acting Assistant Secretary for South and Central Asia, Alice G. Wells, on the side-lines of the meeting during which matters relating to enhancing Pakistan-Afghanistan bilateral trade were discussed.