FM Qureshi has said that enemies of Pakistan have launched hybrid war against the country.

They aim at creating unrest through religious and linguistic divide, but they will not succeed in their nefarious designs.

The FM said minorities in India including Muslim community are suffering unrest and atrocities.

As current regime in India is following the agenda of the supremacy of Hindutva.

He also prayed for the freedom of Occupied Kashmir, ending the sufferings of Muslims in India.

He also prayed for peace and stability in Afghanistan and the Middle East. 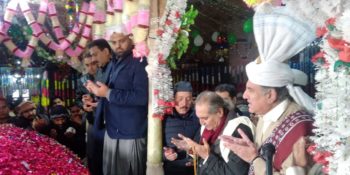 He inaugurated the 706th annual Urs of the Sufi saint.

The three-day Urs of the revered Sufi saint will start today i.e. January 1st and will continue till January 3.

FM Shah Mehmood Qureshi opened the Urs celebrations with shower to the Mazar with rosewater.

He is the spiritual seat holder of the shrine.

On third days a conference will be held to be addressed by prominent scholars and the Urs will end with concluding prayers.

According to officials, the Urs attracts over 100,000 devotees of the shrine mostly from Sindh and southern districts of Punjab.

Born on Ramazan 9, 735, his forefathers had arrived from the holy city of Makkah to Multan.

Moreover, The tomb built between 1320 and 1324 CE by Ghiyath al-Din Tughluq in the pre-Mughal architectural style.

The tomb considered the earliest example of Tughluq architecture, and pre-dates Tughluq monuments in Delhi.

Moreover, The tomb built when Ghiyath al-Din served as governor of Dipalpur, and likely intended to serve as a tomb for himself before he became Emperor of the Delhi Sultanate. Rukn-e-Alam had initially buried in the Shrine of Bahauddin Zakariya,

However, the present tomb gifted by Muhammad bin Tughluq to the descendants of Rukn-e-Alam, who had his remains interred in the shrine in 1330.