The Technical & Financial Evaluation Committee (TFEC) was formed to conduct the bidding process for the project.  The TFEC approved bidding documents under single stage procurement process.

Malir Expressway project was started by the local government department under public-private partnership, and a financial & technical evaluation committee was constituted for the procurement process of this project.

The meeting was told the committee has approved the bidding under the single-stage procurement process, and adverts were published in international and local newspapers on July 31, 2019.

Three companies filed their bids, and a consortium of four companies was declared as the successful bidder because of their lowest bid.

The length of Malir Expressway will be 38.75 KM and it will be a three-into-three-lane expressway alongside the Malir River, beginning from the Korangi Creek Avenue in DHA and ending at the M-9 Karachi-Hyderabad motorway near Kathore via the existing link road.

Malir Expressway will provide speedy access to travelers and will reduce the current time it takes to travel to only 25 minutes. The expressway will have six interchanges. CM Murad Ali Shah said that the scope of the project covers design, finance, build, operation and maintenance.

He also said that the expressway will facilitate thousands of travelers and the heavy traffic commuting from the Karachi port, the Korangi Industrial Area, , the Steel Mills, the Landhi Industrial Area, the Port Qasim and other areas towards up country through the National Highway and the Super Highway.

The policy board approved the issuance of the letter of award to the winning bidder. It also issued directives for clearing the right of way for the expressway, directing the law officer to follow up on the Malir riverbed material lifting petition in court on a priority basis.

Provincial chief executive has termed the decision to approve the contract of expressway as a historic and greatest gifts to the people of the Karachi, particularly the industrialists.

The expressway project is referred to as one of the most significant for connecting the city center to the motorway. The expressway is anticipated to reach completion in the span of two and a half years.

CM Sindh Murad Ali Shah said that “it would be providing fast access to the significant real estate projects along the route, hence decreasing the travelling time from the KPT flyover to the motorway to just 25 minutes”.

The Minister for Local Government Jam Khan Shoro said shared some insights about the project and said, “It will be a four-lane expressway along the Malir River starting from Hino Chowk and ending at the Super Highway (M-9) near Kathore. The length of the project will be 39-kilometres”.

Meanwhile, the CM Sindh expanded on the insight and said that Karachi is a major city of Pakistan with an ever-increasing population. This city is home to industrial areas and two major dry ports that severely need smart road networks and alternative routes to ease traffic congestion and expedite commute from one point to another.

CM said, “the project’s [Malir Expressway] main objective is to construct a strategic expressway to share the increased traffic in the north of Karachi”. He further added, “It would be providing fast access to the significant real estate projects along the route, hence decreasing the travelling time from the KPT flyover to the motorway to just 25 minutes”

Over the years Pakistan have seen great initiatives and reforms in road construction and transportation sector. Following the footsteps of federal government, the provincial government has launched a mega project Malir Expressway.

It’s an undeniable fact that the Karachi is the biggest metropolitan city in Pakistan – not in terms of population only but also looking at the robust employment ratio and fastest-growing business potential.

In order to keep the city traffic moving, the Sindh Government, in collaboration with the local government, has approved the construction of a four-lane dualised expressway initiating from KPT Interchange to M9 Motorway. As per the plan, the project is divided into two phases for safe and smooth execution and delivery. Here’s a peek into both phases:

The proposed route map of Malir Expressway will be the shortest route to M-9 Motorway beginning from DHA Karachi. It is designed for fastest yet safe travel from the urban areas of the city to nearby Karachi-Hyderabad Motorway.

Here is the complete route map of Malir Expressway: 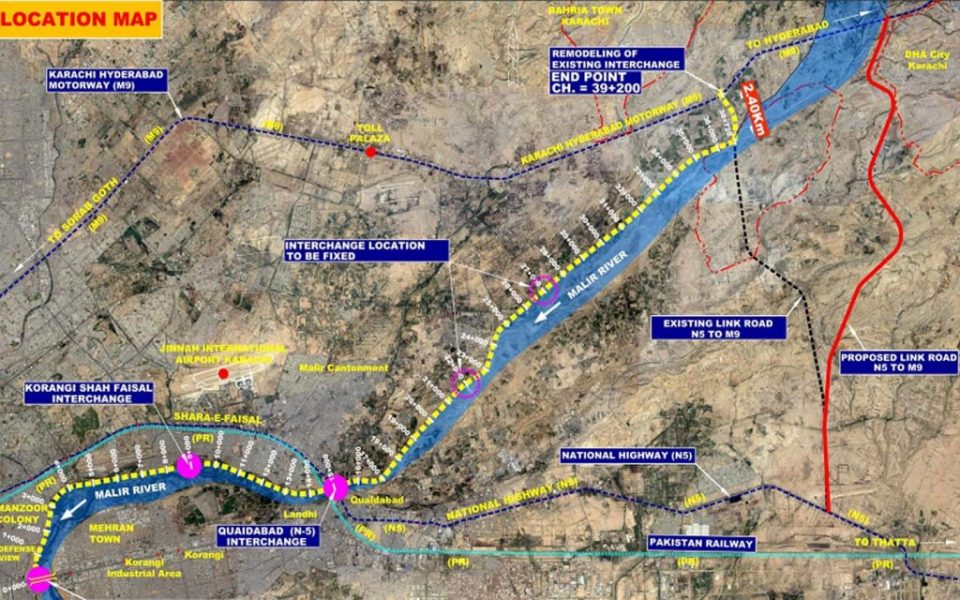 The expressway will provide great amount of ease to people who are planning to visit the city or relocating in the northern parts of the city. The table below provides you the detailed information about the project.

Saudi Arabia's Ministry of Tourism has allowed tourists from other countries to...

COVID-19 crisis is worsening across Karachi, hospitals across the city were filled...

Pakistan and Bahrain have signed a Memorandum of Understanding (MoU) for the...