How does this corona bite? CM Buzdar Sent legal notice to Fahad Hussain

According to the press release issued by a focal person of the CM Punjab, a legal notice has been sent to Fahad Hussain which demands him to ask for an apology or to pay 250 million against the defamation he made through his news story.

Earlier this day, a screenshot of the English daily was getting viral in social media related to Sardar Usman Buzdar stated that the executive asks experts about how Coronavirus bites?

Fahad Hussain writes that at the end of the briefing, the chief minister asked a question innocently: “Yeh corona kaat-ta kaisay hai? (How does this corona bite)?”

Legal notice served to the columnist Fahad Hussain for attributing a totally baseless and fake story to CM Punjab Usman Buzdar declares the content of the Newspaper as baseless and also said nothing of the kind has been asserted therein ever happened.

The notice also reads that clear and unqualified instruction given to instituting civil and criminal proceedings against Fahad Hussain if he doesn’t apologies, unequivocally, to the satisfaction of CM Punjab Usman Buzdar in addition to 250 Million Rs as damages. 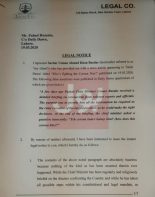 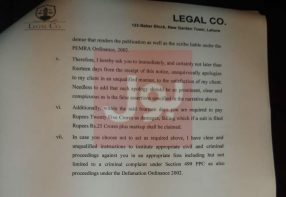 It is pertinent to mention that Pakistan’s social media users started trolling the Chief Minister of Punjab on this and became one of the top trends on twitter.