Our stance is based solely on national interests, says Ahsan Iqbal

On Tuesday, PML-N issued a circular barring all its members from meeting with any armed forces personnel and its related agencies as per the directives of Nawaz Sharif given last week.

PML-N Secretary General Ahsan Iqbal said in the circular that if however, such a meeting is necessary “in the interest of national security and/or fulfillment of constitutional responsibilities, then it shall be done indiscreetly and with the prior permission of the party’s Quaid.”

It is pertinent to mention here that PML-N leader Nawaz Sharif had issued a statement that barred all of the party members to hold individual, private, or delegation-level meetings with the military without prior permission of the PML-N leadership.

Nawaz’s directives came a day after an army spokesperson revealed that Mohammad Zubair, former Sindh governor had reached the Chief of Army Staff (COAS) Gen. Qamar Javed Bajwa twice and discussed the political and legal distress of Nawaz Sharif and Maryam Nawaz in the past several weeks.

Ahsan Iqbal said in the circular issued today that the PML-N is battling for the country’s survival.

“Our stance is based solely on national interests for constitutional supremacy in the country and remains above political and personal concerns,” said Iqbal.

He further added that Nawaz Sharif had asked him to convey the policy of the party regarding meetings with the military leadership.

“The PML-N is of the firm view that such meetings, even though conducted in good faith, may cause undue controversies. We all know that the contents of such meetings may be selectively leaked in order to serve specific interests and malign the political fraternity.”

Iqbal added that Nawaz Sharif had witnessed the “overwhelming response” from the party as well as from the public as highlighted at the PPP-hosted all-party conference, Nawaz, however, expected strong support from the party leadership especially during the time when Pakistan is going through a “defining democratic crisis”. 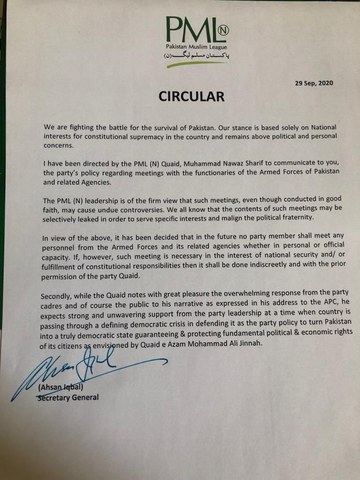 In the past recent days, the relations between the PTI-led government and opposition have become tenser after the latter held a conference where they announced an anti-government movement and criticized the interference of the military in the country’s politics.

After the conference on 21st September, in which the former Prime Minister criticized the army for interfering in politics, several revelations came into sight regarding the civil-military meetings.

Most highlighted was the meeting of COAS and Head of the Inter-Services Intelligence Lt. Gen. Faiz Hameed with the prominent opposition figures days before the All Party Conference.

Reportedly, Prime Minister Imran Khan had said that he was aware of all the meetings, and accused the opposition of creating a rift between the government and the armed forces.

Legendary cricketer Wasim Akram on Saturday bashes the picnickers over leaving the...