An officer and five soldiers were martyred in an IED blast on a military convoy in the North Waziristan tribal district of Khyber Pakhtunkhwa.

After the incident, security forces cordoned off the area and launched a clearance operation. 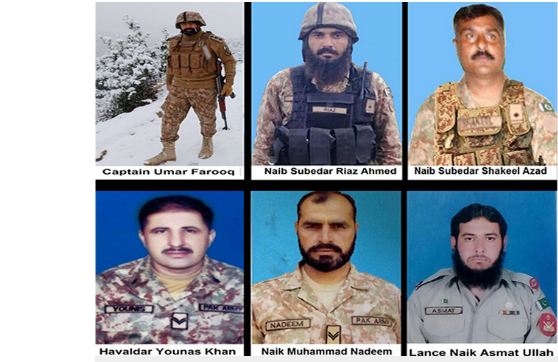 It should be noted that attacks on security forces in the tribal districts have increased in the last few months.

According to ISPR, the remote-controlled blast took place near a security forces check post on Boya Road in Miranshah.

The statement said that 33-year-old soldier Sajid was martyred in the blast.

Earlier on September 4, three personnel, including an officer, were martyred in an IED blast near a Pakistan Army convoy in North Waziristan.

The ISPR statement said that a remote-controlled bomb was detonated by terrorists near a Pakistan Army contingent guarding a road repair team in the Gherium sector on Shaganshpa Road in North Waziristan.

Lt. Nasir Hussain Khalid, 23, Naik Muhammad Imran, 33, and Usman Akhtar, 30, were martyred in the blast. 4 soldiers were injured in the attack.

During a search operation in South Waziristan on August 31, three Pakistani soldiers were martyred by firing on security forces.

Earlier, on July 12, four Pakistani soldiers were martyred and four others were killed during an operation against militants in the Miranshah area of ​​North Waziristan.

On May 8, two Pakistan Army personnel were martyred in a rocket attack on a security check post in Miranshah area.