The Prime Minister of Pakistan, Imran Khan, has turned 68-year-old today (5th October). Before entering into politics, Imran Khan was the captain of the Pakistan cricket team for both international and national cricket.

PM Khan was born on 5th October 1952 to a Pashtun family in Lahore and did his graduation from Keble College, Oxford in 1975.

At the age of 18, Imran Khan began his international cricket career. Under his captainship, Pakistan won its first Cricket World Cup in 1992.

After his retirement from cricket in 1992, Imran Khan Niazi founded his own political party “Tehreek-e-Insaf” (PTI) in 1996 and serves as the party’s national leader. He won the seat in the National Assembly in 1992. Until 2007, Imran Khan served as an opposition leader from Mianwali.

Imran Khan was elected as the Prime Minister of Pakistan in 2018. As a Prime Minister, Imran Khan has initiated many projects for the development of Pakistan. Khan launched an anti-corruption campaign but was criticized by political opponents for alleged targeting.

Imran Khan’s followers are excited about their leader’s birthday and extended their birthday wishes to him. #HappyBirthdayPMImranKhan becomes the top trend on micro-blogging site Twitter. 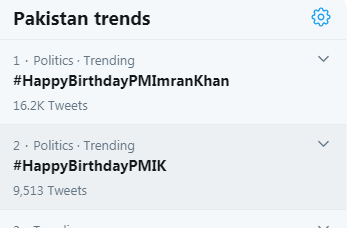 PM Imran warns of second wave of COVID-19 in winters

The Prime Minister Pakistan Imran Khan on Sunday has urged masses to...