Bakhtawar Bhutto’s Engagement: Who Is Zardari’s Son In Law?

According to a statement issued by Bilawal House Karachi, Bakhtawar Bhutto Zardari will be engaged to Mahmood Chaudhry and the ceremony will be held on November 27 in Karachi.

The invitation also includes a list of instructions for the coronavirus pandemic, which will invite a limited number of guests to the event and take care of social distances. 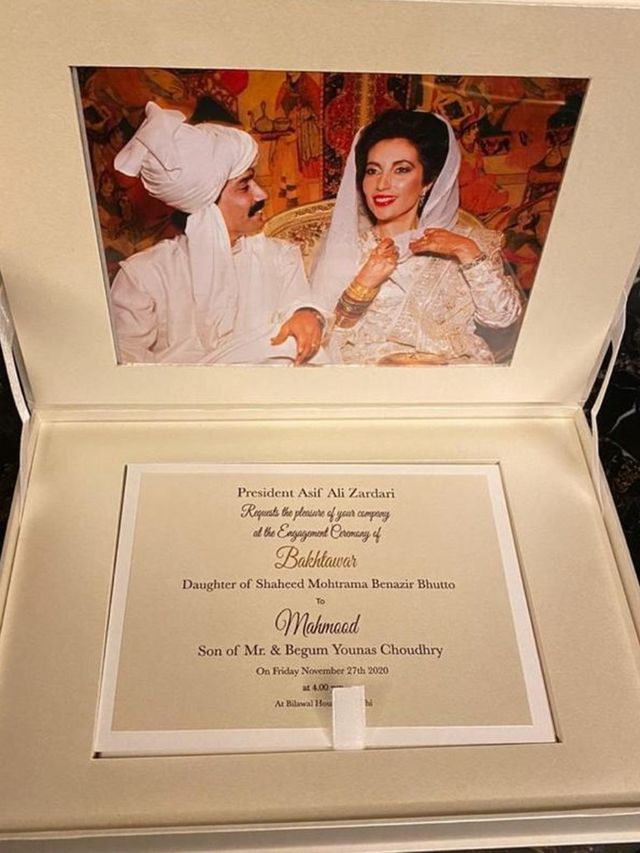 According to the instructions, the guests coming to participate in the event will have to take their corona test first and send a copy of their negative corona test by e-mail and only after that these guests will be allowed to join the event.

In addition, the instructions state that mobile phones will not be allowed at the event.

Asif Zardari and Benazir Bhutto have three children, of whom Bakhtawar is the second.

The third child of Asif Ali Zardari and Benazir Bhutto is a daughter Asifa Bhutto Zardari who was born in February 1993.

The announcement is also being discussed on social media and many users are congratulating Bakhtawar Bhutto on her engagement.

Heartfelt congratulations to BB Bakhtawar Bhutto Zardari on her new chapter of life. May Allah bless her with loads of happiness and wonderful new journey. pic.twitter.com/sWqpAhh3dh

It is very good news that the engagement of Mohtarma Benazir Bhutto and respected Asif Ali Zardari's daughter Mohtarma Bakhtawar Bhutto zardari has been arranged. On this happy occasion, many prayers and best wishes to our Princess Bakhtawar Bhutto Zardari and Mahmood Chaudhry. pic.twitter.com/PTjlejqvJ6

One of the legendary footballers of all time, Diego Maradona passes away...

The World Bank has on Wednesday pledged to provide $19.8 million aid...

Diego Maradona dies: Ronaldo pens touching note to one of the greatest footballers

Legendary Portugal’s Cristiano Ronaldo is deeply saddened on the passing of iconic...

Pakistan Telecommunication Authority (PTA) has declared that all calls made to National...