– Media Fraternity has been protesting since months over the illegal appointment of Chairman PEMRA
– Petition filed by journalist in Lahore High Court
– Petition stating that the appointment is illegal
– Apart from not meeting the work experience requirement, Saleem Baig’s educational background does not match the job requirement
– Court direction to submit replies from PEMRA and Saleem Baig

A wave of protests in the media fraternity of Pakistan has been making its mark all over the country against PEMRA GATE (Illegal appointment of Chairman PEMRA Saleem Baig). You can find journalists, camera men, news producers and editors complaining outside press clubs of every city and the demonstrations have been going on since months now. This disapproval has not been limited to press clubs but has now reached its eventual destination, the honorable High Court. Even though the issue at hand is quite popular, let us look at the point in question that has seemed to plague the news reporting scenario in Pakistan.

1. These protests that have been stated above are against an ‘ineligible’ and ‘irresponsible’ individual whose appointment as head of a federal institution has been itself a big controversy. The targeted individual is none other than the current Chairman Pakistan Electronic Media Regulatory Authority (PEMRA), Mr. Muhammad Saleem Baig whose appointment is not based on any sort of merit previously employed for other chairmen of the past. In this appointment, the claim of many deserving candidates has been completely surpassed.

2. Many media networks complained how Saleem Baig is using his post to null the voices of an independent media and news channel which, as soon as their inception, have been the people’s voice by covering their problems in news bulletins and making sure the country and the world hear their plea. These appeals, time and time again, have been blocked by Chairman PEMRA occasionally. However, this is not something new as these type of tactics have always been employed by anti-state elements to mute the echoes of truth and it is very effectively done through hiring illegible and biased individuals at such honorable posts.

3. Suddenly, requirements are changed and rules are flipped so that the game works in the favor of YOUR PREFERRED individual and this has been the case in the selection of Baig as two job advertisements were posted before the appointment. Below you can find images of both the job advertisements and notice the changes yourself:

Even though the education requirement was relaxed, Baig’s qualification was way short of the threshold required for Chairman PEMRA. In the first job advertisement, the appropriate work experience was 20 years and in the second one, the compulsory experience was completely omitted. All of this done to appoint Saleem Baig as Chairman. It has to be noted that these advertisements are printed from the tax payers’ money and how they are being wasted for the gains of a few is surely shocking.

4. Furthermore, before being appointed Chairman PEMRA, Baig was working in another federal government department from where he suddenly retired and returned as Chairman PEMRA the next day which was a complete and open breach of the Government Services Rule 1966. This see off the success of this crime, Information Secretary at the time, Ahmed Nawaz Sukhera was conveniently removed from his post for three days so that the appointment happens without any unwanted legal barrier. He was given the post back after appointment of Chairman PEMRA. Sukhera was removed due to the fact that he was appointed by the Supreme Court as part of the Chairman Selection Board.

This atrocity has been pointed out and a petition was filed in the Lahore High Court against this illegal appointment. The Court has sought replies from PEMRA and all other bodies named in the petition. Justice Shahid Kareem remarked that if PEMRA takes any legal action against the petitioner, the petitioner can refer the matter to the court. The court also objected the appointment of only one lawyer by both PEMRA and Saleem Baig as one of the judges ordered the laywer to represent only of the two. The petition was filed by BOL News’ Anchorperson, Zaheer ud Din Babar.

According to the petition, “Chairman PEMRA’s educational qualifications also do not match the newspaper advertisement, Saleem Baig holds an MA in Political Science whereas the advertisement that was issued for the Chairman’s appointment, required finance and law as the educational background. The petitioner requested that the appointment of Saleem Baig should be declared as contradictory to the decisions of the High Court and the Supreme Court. The petition also requested the court to remove Chairman PEMRA Mirza Saleem Baig from office.

The initial JOB Ad for the post of Chairman PEMRA required 20 years of experience. 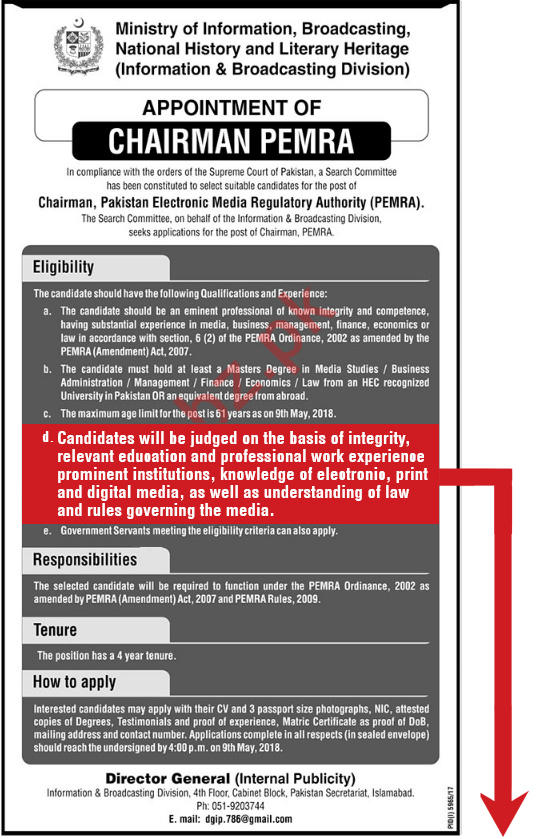 Candidate will be judged on the basis of integrity, relevant education and professional work experience in prominent institutions, knowledge of electronic, print and digital media as well as understanding of laws and rules governing the media 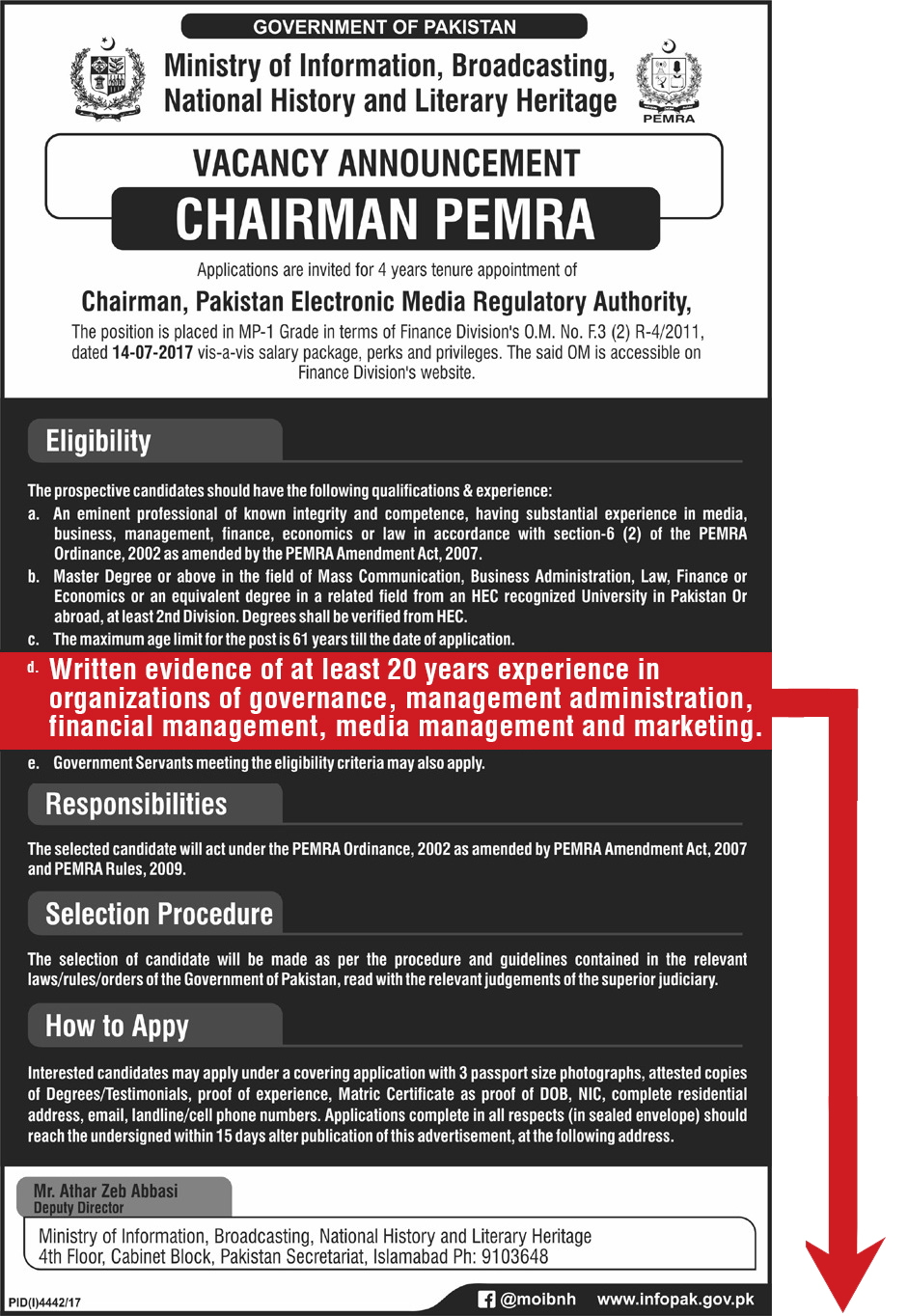 Altered Criteria for the Post of Chairman PEMRA in new Ad

Suddenly, requirements were changed and in the new JOB ad for the post of Chairman PEMRA the requirement of 20 years of experience was removed.

The education of Saleem Baig is irrelevant for the post of Chairman PEMRA. 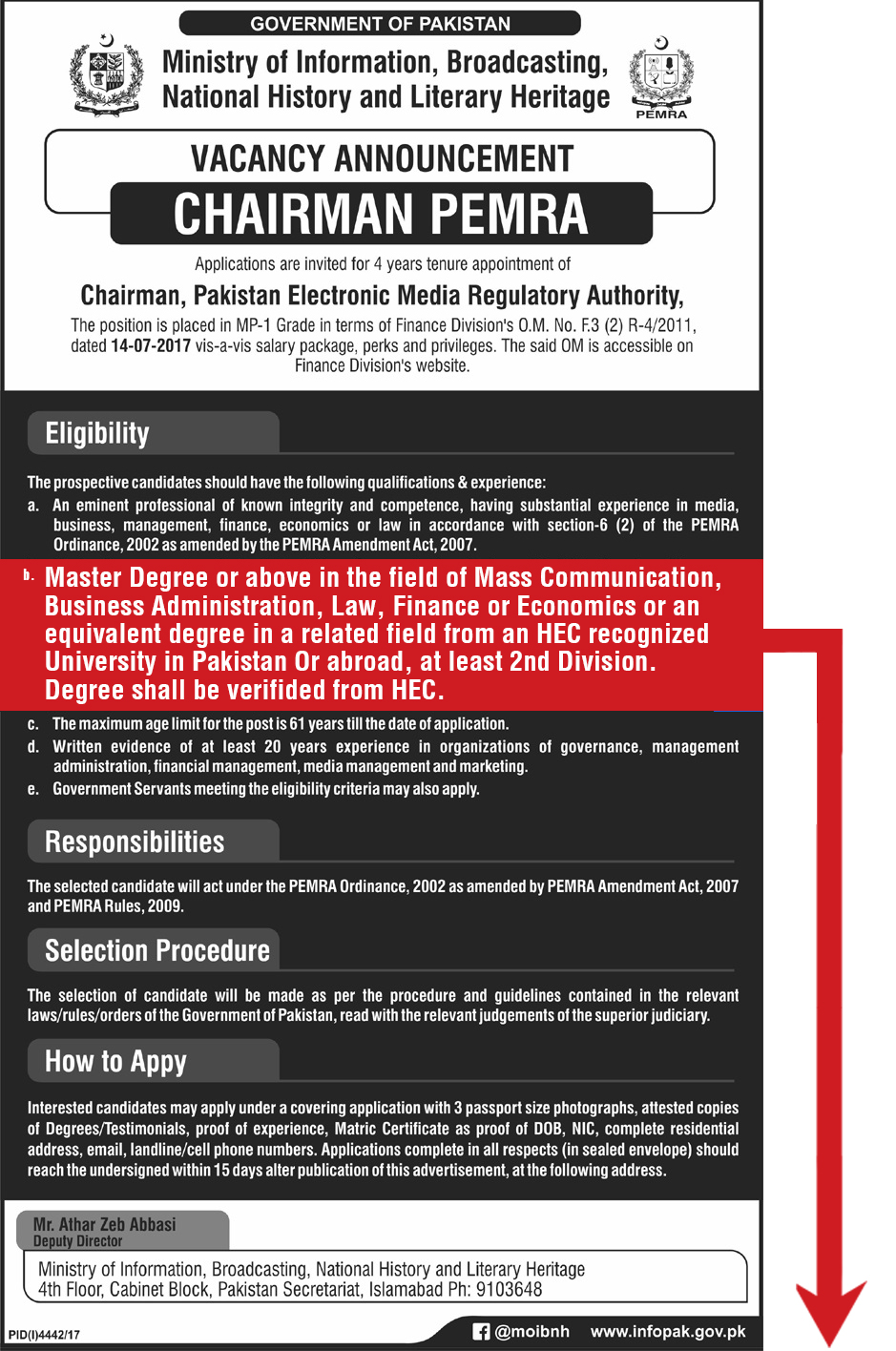 Master Degree or above in the field of Mass Communication, Business Administration, Law, Finance or Economics or an equivalent degree in a related field from an HEC recognized University in Pakistan Or abroad, at least 2nd Division. Degree shall be verifided from HEC.

Whereas Baig has MA in Political Science from Punjab University.

Before being appointed Chairman PEMRA, Baig was working in another federal government department from where he suddenly retired and returned as Chairman PEMRA the next day which was a complete and open breach of the Government Services Rule 1966.

When the appointment of Absar Alam as Chairman PEMRA was challenged in the Honorable Lahore High Court, on of the dubious selection grounds highlighted in the judgement was that it is hardly possible for a selection board to conduct 60 interviews in one day, thus the appointment is questionable. In case of the current Chairman, Saleem Baig, a total of 160 interviews were conducted in a single day which is most certainly not possible.

The Court on Thursday has granted permission to the Federal Investigation Agency...

Prime Minister Imran Khan has expressed condolence over the death of PTI...

On the directions of Chief Minister (CM) Punjab Sardar Usman Buzdar, the...

The Court on Thursday has granted permission to the Federal Investigation Agency...