PSL 2021: Know the parking spots for matches in Karachi

Pakistan Super League 2021 (PSL) is just around the corner and the first match will be played at National Stadium Karachi.

As a great audience will visit the stadium to see the match live, they will be finding the optimum parking spots. 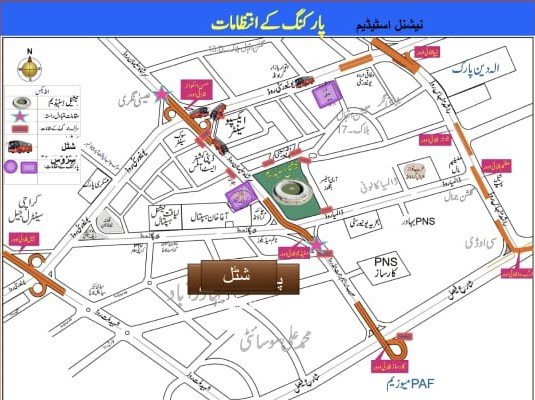 The district administration on Friday has released the parking areas for those attending the matches. The administration said three parking spots have been set up near the National Stadium.

According to the press release, a parking spot for the public has been set up at the Hakeem Said Ground.

Moreover, two more parking spots have been set for VIPs at the National Coaching Center and China Ground.

The administration has also decided to launch a shuttle service to the stadium.

Pakistan Cricket Board (PCB) has made special standard operating procedures (SOPs) for the upcoming sixth edition of the Pakistan Super League (PSL).

According to the reports, PCB has allowed only 20 percent of spectators to watch live matches in the stadium after approval from National Command and Operations (NCOC), 6500 spectators can watch a match at National Stadium Karachi while the capacity at Gaddafi Stadium Lahore is 4500. Only one person can buy a ticket on an ID card. Tickets can be booked on children’s B form.

PCB has given guidelines to all the spectators who wanted to watch live matches in the stadium of the PSL 6, people must have their face mask and ID card before entering the stadium, and after that spectators will sit with a gap of six feet.

To all the PSL fans, you can enjoy the live broadcast of...