Pakistani Skipper Babar Azam has achieved another milestone on Wednesday, but this achievement is not directly linked to his prowess as a batsman.

As per reports, Babar Azam is now one of the most popular Pakistani cricketers on micro-blogging site Twitter, as he recently amassed two million followers on the website.

Babar Azam is in tremendous form these days as he managed to break two world records in a span of a week due to his powerful batting. 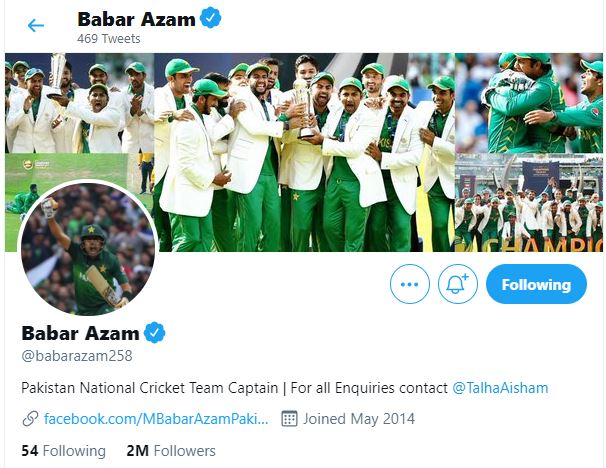 Babar Azam was able to achieve the impressive feat from just 52 T20I innings whereas Indian skipper Virat Kohli, who previously held the record, managed to do the same in just 56 innings.

The new record from the Pakistani skipper comes shortly after he outclassed Indian captain Virat Kohli to become the top-ranked ODI batsman in the world, earlier this month.

Azam now sits on top of ICC’s ODI batsman rankings with 865 points and Kohli is number 2 with 857 points.

Babar Azam made the new record while playing against Zimbabwe in the third and final T20I match of the series against Harare.