Exams schedule for grades I to VIII announced

Exams schedule for grades I to VIII announced

The Punjab Examination Commission (PEC) on Wednesday announced the schedule of examinations for grades I to VIII in 13 districts of the province.

According to the details, a notification has also been issued in this regard by PEC. As per the notification, the PEC reviewed the schedule of the conduct of School Based Assessment in the wake of the decision of the National Command and Operation Centre (NCOC) to close academic institutions in COVID-19 affected districts.

The exams for grade I to VIII will begin from June 7 and continue until June 25 whereas schools will start issuing report cards from June 30. More than 5 million students of classes one to eighth will sit the exams. 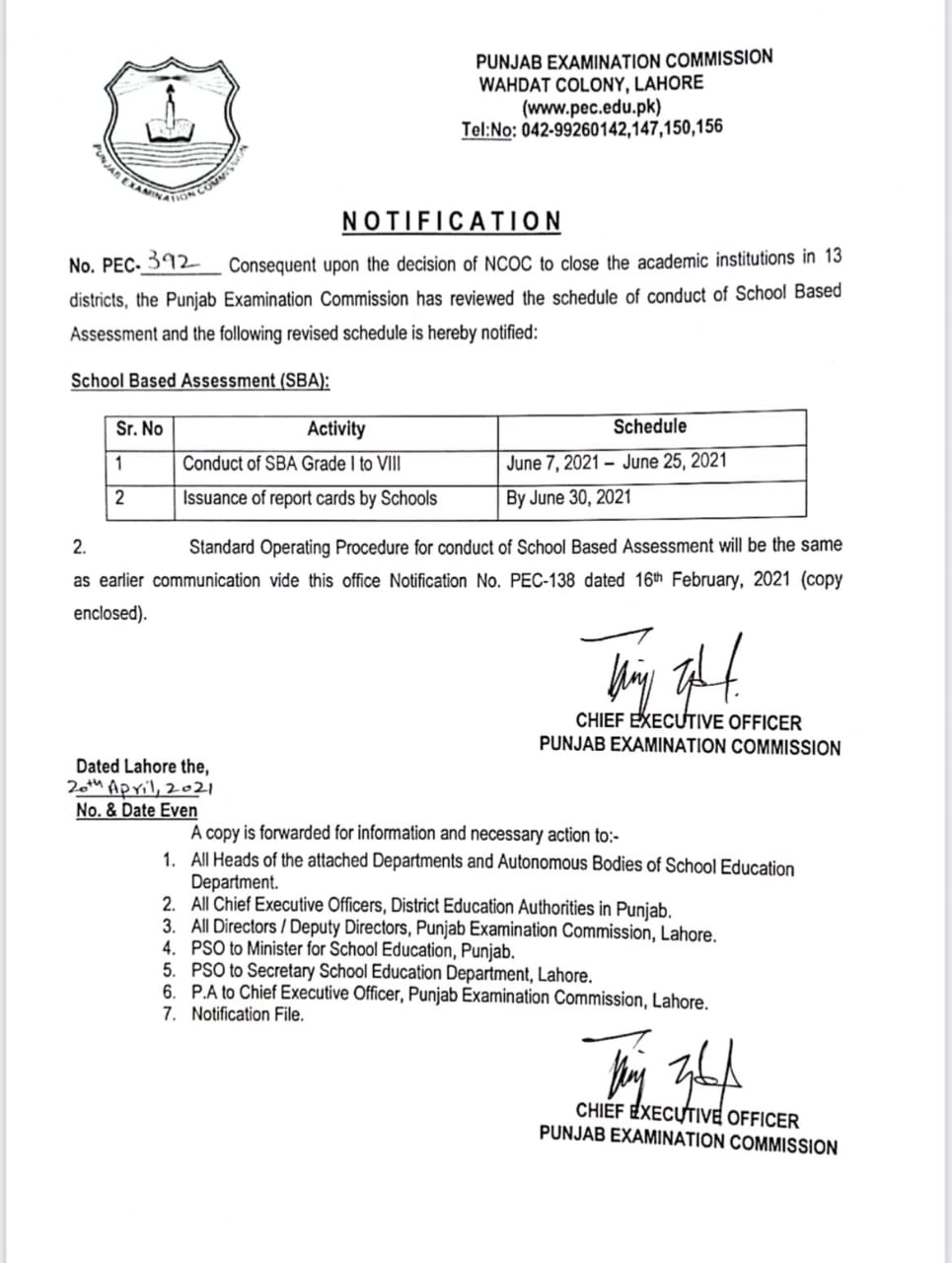 The minister took to Twitter and shared the decisions taken during a meeting of the health and education ministers of all four provinces.

The minister said classes of grades 9-12 will begin in affected districts in a staggered manner so students can prepare for their upcoming board exams.

“A special meeting of Health and Education Ministers of all provinces and AJK/GB was held today. The following decisions were taken with complete consensus. 1) Classes 9 to 12 would commence in affected districts in a staggered manner to allow students to prepare for Board exams,” he tweeted.

Mehmood said Cambridge had announced it will not give teacher assessment grades this year hence those not appearing for the exams this semester can do so in October and November.

“Meeting was also informed that Cambridge has decided not to give teacher assessed grades this year, therefore, those not taking exams will take them in the next cycle Oct/Nov. Cambridge also assured that all SOPs will be strictly followed,” he tweeted.

On the other hand, the Khyber Pakhtunkhwa Minister for Elementary and Secondary Education Shahram Khan Tarkai said that about 27000 teachers are being recruited across the province in the next few months.

He said that the induction will be made before the start of new session in August.

In Lahore's Mayo hospital, a special, unexplained torture cell was discovered. According...

No basic services to non-vaccinated from October 1, warns NCOC

The National Command and Operation Centre (NCOC) on Tuesday warned the masses...