According to a statement issued by PEMRA, instructions have been issued to all TV channels and FM radio stations in this regard.

PEMRA further stated that the Interior Ministry has banned Tehreek-e-Labbaik Pakistan and under Section 27 of the PEMRA Regulation and Code of Conduct PEMRA Ordinance 2002, media coverage of banned outfits is prohibited.

The Tehreek-e-Labbaik Pakistan (TLP) has been declared null and void by the interior ministry here on Thursday.

The interior ministry has issued an official statement about TLP in this regard.

The notification read, “The federal government has reasonable grounds to believe that Tehreek-e-Labbaik (TLP) Pakistan is engaged in terrorism, acted in a manner prejudicial to the peace and security of the country, involved in creating anarchy in the country by intimidating the public, caused grievous bodily harm, hurt and death to the personnel of Law Enforcement Agencies and innocent by-standers, attacked civilians and officials, created wide-scale hurdles, threatened, abused and promoted hatred, vandalised and ransacked public and government properties including vehicles, and caused arson, blocked essential health supplies to hospitals, and has used, threatened, coerced, intimidated, and overawed the government, the public and created sense of fear and insecurity in the society and the public at large.” 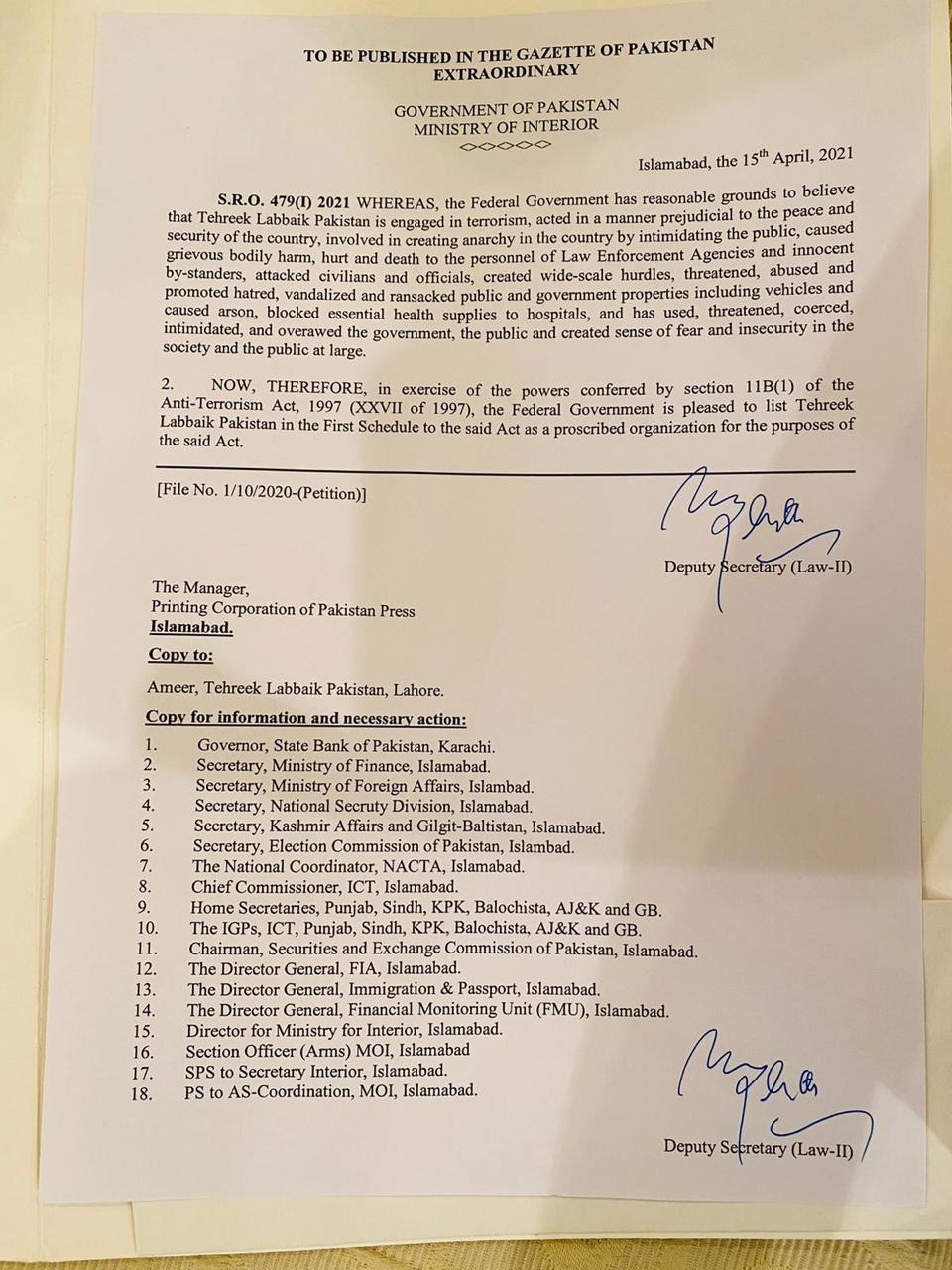 “In exercise of the powers conferred by Section 11B(1) of the Anti-Terrorism Act, 1997, the Federal Government is pleased to list Tehreek Labbaik Pakistan in the First Schedule to the said Act as a proscribed organisation for the purposes of the said Act,” the notification added.

Earlier in the day, Federal Interior Minister Sheikh Rasheed has on Thursday lambasted the religious party that created intense violence in various cities of Pakistan and termed them “quite dangerous”.

While addressing a press conference alongside Nooru-ul-Haq Qadri, Sheikh Rasheed said, “They were adamant on coming [at the Faizabad Interchange] for the fourth time.”

He added, “This is why we took decisions to prevent that.”

The minister lauded the efforts of law enforcement personnel who got wounded in the clashes.

The interior minister said the violence was unfortunate as the government was willing to negotiate with protesters.

“We got to know during the negotiations that they [religious party] were planning a march on April 20,” he said, adding that the reaction from the party after the arrest of a leader could not be justified.

“The reaction was neither in harmony with what our religion says nor what our Constitution says,” Rasheed added.

He said the government won’t allow any leisure to those who spread anarchy across Pakistan.

“No one is being allowed to go, no relaxation will be provided to them,” he said.

Mufti Muneeb-ur-Rehman has addressed a press conference at Karachi Press Club on...

The terrorists on Sunday targeted Security Forces’ post in Mach, Balochistan, where...