Prime Minister Imran Khan has arrived at the Kingdom’s airport to return home after a successful visit to Saudi Arabia.

During the visit, Foreign Minister Shah Mehmood Qureshi and members of the Federal Cabinet accompanied the Prime Minister.

Earlier on 8th May, Prime Minister Imran Khan reached Madinah to pay homage to the Holy Prophet (PBUH) barefoot which had garnered the attention of people.

The Prime Minister was received at the airport by the Governor of Madinah, Amir Faisal bin Salman bin Abdul Aziz. 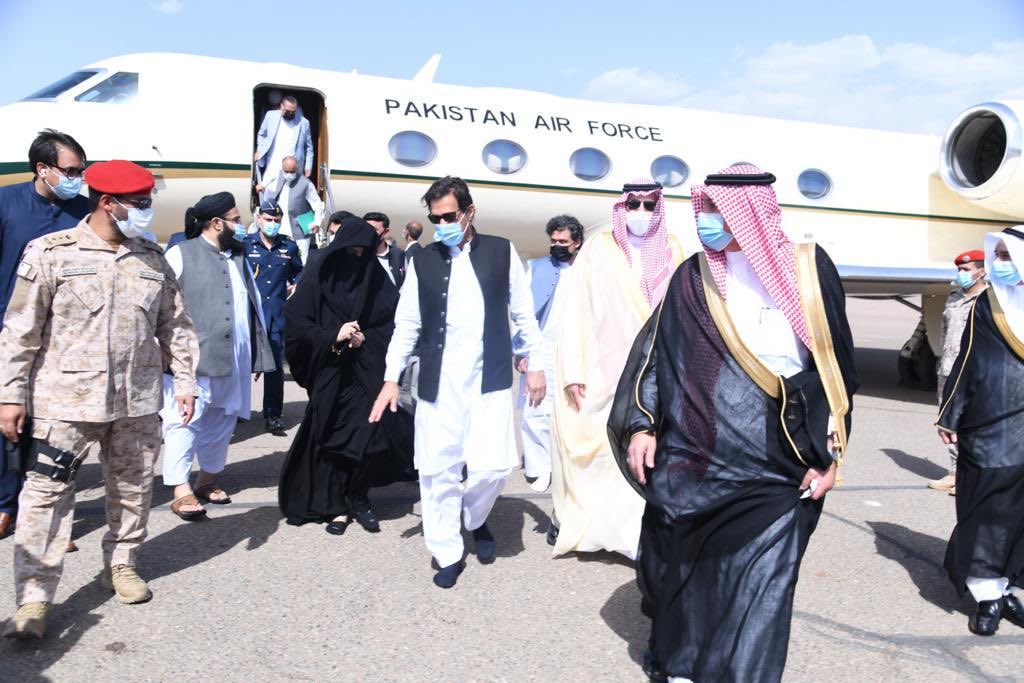 Doors Of Sacred Kaaba Once Again Opened For PM Imran

Earlier today, the doors of the sacred Kaaba were once again opened for the Prime Minister of Pakistan Imran Khan as he performed Umrah on Sunday as part of his three-day visit to Saudi Arabia. 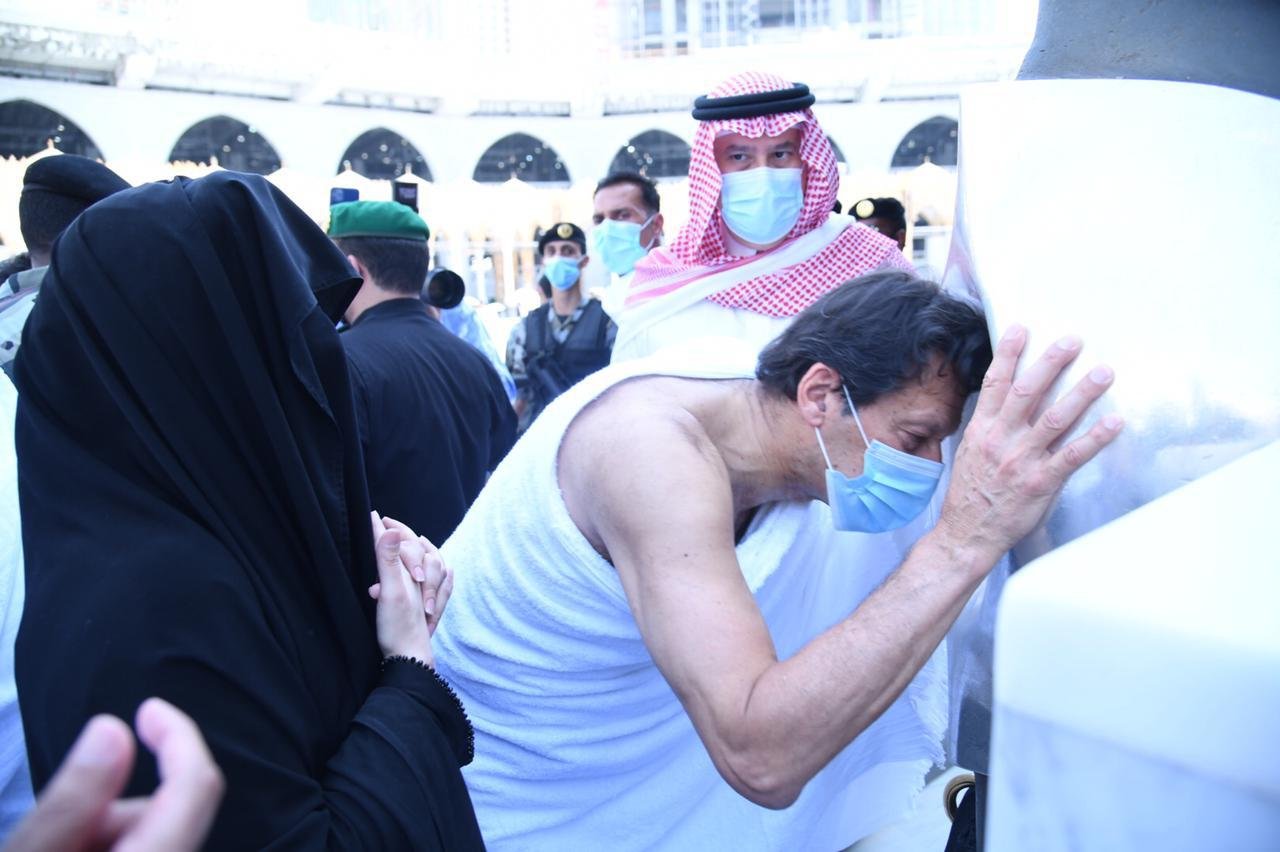 Senator Faisal Javed Tweeted that the door of the holy Kaaba was once again opened for the Prime Minister of the Islamic Republic of Pakistan Imran Khan. 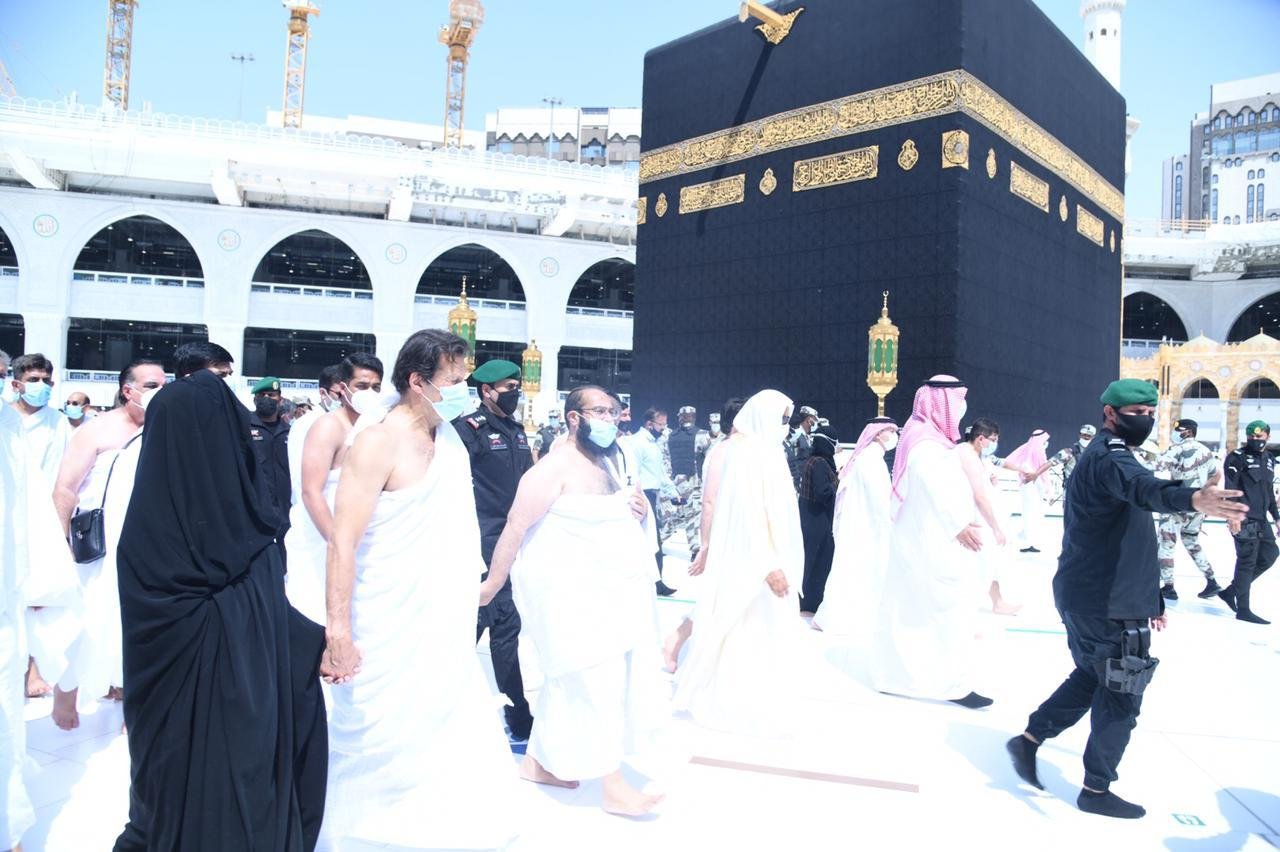 Prime Minister Imran Khan has said that there are mafias in Pakistan who want to save the old rotten system but now no one can stop the change.

He said that there is a decisive moment in Pakistan at the moment, on one side is the old status quo, on the other side are the mafias who are trying to save the old system.

“On the other hand, the entire people of Pakistan are with me and we are leading the way to change and the rule of law. This is in fact a struggle for the rule of law,” he said.

Imran Khan said that a society goes where the rule of law prevails, where there is the rule of power, this society has not developed to date. 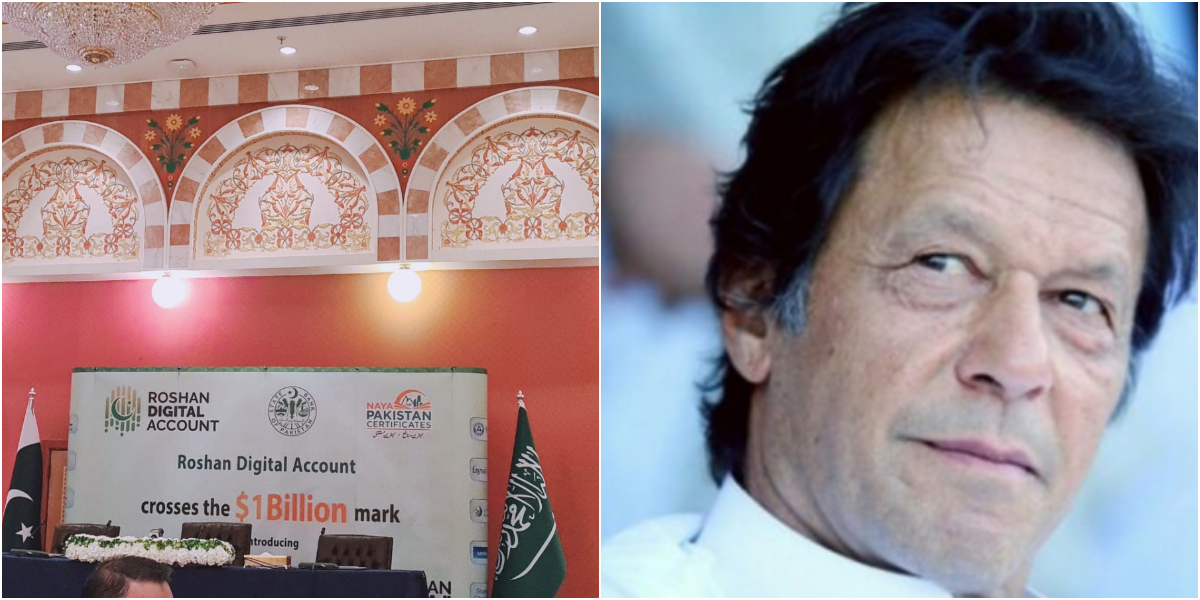 “On the one hand, there are mafias who are taking advantage of the corrupt system and all are together, on the other hand, the people and our government are fighting for a change,” he said.

Imran Khan said that no one can stop this change because there is awareness within the country and the nation has understood the issues, the reason is social media, the youth have first-hand information.

The Prime Minister said that our party came to power because of social media and the youth, this change is also due to the youth.

2. The two leaders reaffirmed the historical and fraternal ties between the Kingdom of Saudi Arabia and the Islamic Republic of Pakistan, reviewed all facets of bilateral cooperation and discussed regional and international issues of mutual interest. The two sides discussed ways to strengthen relations of the two brotherly countries in all fields and agreed to intensify contacts and cooperation between government officials and the private sector in the two countries with the aim of promoting bilateral relations to the benefit of both countries.
‎‏

3. His Excellency Prime Minister Imran Khan praised the leadership role of the Custodian of the Two Holy Mosques King Salman bin Abdulaziz Al Saud in promoting Islamic unity, and the positive role of the Kingdom in resolving the issues facing the Islamic world, as well as its endeavours for regional and international peace and security.
‎‏

4. The Prime Minister recalled his visits to the Kingdom in 2018 and 2019, as well as the historic visit of His Royal Highness, the Crown Prince, Deputy Prime Minister, Minister of Defence to Pakistan in February 2019, during which the two leaders jointly announced the launch of the Saudi-Pakistan Supreme Coordination Council, to further enhance bilateral cooperation based on mutual trust, benefits and common interests of the two countries. The Crown Prince assured the Prime Minister of the Kingdom’s continued support to Prime Minister’s vision to transform Pakistan into a modern developed and welfare state.

5. The two sides discussed ways to strengthen and enhance economic and trade relations by exploring areas of investment and opportunities available in light of the Kingdom’s 2030 vision and Pakistan’s development priorities emanating from a shift from geo-politics to geo-economics. The discussions also focused on increasing cooperation in other fields, including energy, science, technology, agriculture and culture. Both sides expressed satisfaction at existing cooperation in bilateral military and security relations and agreed to further augment collaboration and cooperation to achieve mutually agreed goals.

‎‏6. The two leaders also discussed issues pertaining to the Islamic world. They stressed the need for concerted efforts by the Muslim countries to confront extremism and violence, reject sectarianism, and strive to achieve international peace and security. They also stressed the importance of continuing joint efforts to combat terrorism, in all its forms and manifestations. They reaffirmed that terrorism cannot and should not be associated with any religion, nationality, civilization, or ethnic group.
‎

7. In the constructive spirit of discussions, the two sides reaffirmed their full support for all the legitimate rights of the Palestinian people, especially, their right to self determination and establishment of their independent state with pre-1967 borders and East Jerusalem as its capital, in accordance with the Arab Peace Initiative and relevant UN resolutions. They also expressed their support for political solutions in Syria and Libya, as well as the efforts of the United Nations and its envoys in this regard.
‎‏

8. The two sides also stressed the importance of supporting efforts to reach a comprehensive political solution to the conflict in Yemen based on the Gulf Initiative and its implementation mechanism, the outcomes of the comprehensive national dialogue, and the relevant Security Council resolutions, including Resolution (2216). They condemned the attacks of terrorist groups and militias, including Houthi militias, by ballistic missiles and drones on the territory of the Kingdom of Saudi Arabia against vital installations and civilian objects. They expressed serious concern at the threats posed to the security of oil exports and the stability of energy supplies, which was vital for the progress and development of the region and its peoples. The Prime Minister praised the role of the Kingdom of Saudi Arabia for the resolution of the crisis in Yemen which aims at achieving peace and security in Yemen which will result in prosperity and development of the region and its people.
‎‏

9. Discussing the situation in Afghanistan, the Crown Prince acknowledged Pakistan’s facilitative role in the Afghan peace process. The two sides, underlining that an inclusive, broad-based and comprehensive political settlement is the only way forward, urged the Afghan parties to realize the historic opportunity for achieving a political settlement in Afghanistan. The two leaders agreed to continue mutual consultations on the Afghan peace process.

10. Pakistan and Saudi Arabia agreed to continue supporting each other at multilateral fora. They agreed to further deepen coordination and cooperation to safeguard mutual interests and uphold the principles of fairness and justice. The two sides also stressed the importance of the commitment by all States to the United Nations Charter, the principles and decisions of international legitimacy, as well as adherence to the principles of good neighbourly relations, respect for the unity and sovereignty of states, non-interference in their internal affairs, and the endeavour to resolve disputes by peaceful means.
‎‏

‎‏12. The Prime Minister congratulated the government of the Kingdom of Saudi Arabia for successfully organizing and holding the G20 summit meetings and the positive decisions that resulted from it in economic, developmental, environmental, health, energy and other fields.
‎‏

13. Acknowledging the leading role of the Kingdom in addressing international issues, in particular the challenge posed by climate change, the Prime Minister welcomed “the Saudi Green and Middle East Green Initiatives” launched by His Royal Highness Prince Mohammed bin Salman bin Abdulaziz Al Saud and hoped that the initiatives will have a positive impact on the region, its inhabitants and beyond. The Crown Prince appreciated the Prime Minister’s “Clean and Green Pakistan” initiative, as well as the successful “10 Billion Tree Tsunami” initiative.

14. The Prime Minister appreciated the efforts of the Kingdom and its leadership in serving the Two Holy Mosques, their pilgrims, Umrah performers and visitors, especially in organizing the Hajj season for the past year 1441 AH, despite the challenges posed by the Corona pandemic.
‎‏15. In order to further strengthen and diversify bilateral relations, the following agreements and Memoranda of Understanding were signed;
‎‏

iv. Cooperation Agreement in the Field of Combating Crimes; and
‎‏

16. The Prime Minister expressed gratitude and offered his best wishes to His Majesty King Salman bin Abdulaziz Al Saud, Custodian of the Two Holy Mosques, His Royal Highness Crown Prince Muhammad bin Salman bin Abdulaziz Al Saud, Deputy Prime Minister and Minister of Defence, and the brotherly people of the Kingdom of Saudi Arabia. His Royal Highness the Crown Prince warmly reciprocated with best wishes for the health and wellbeing of the Prime Minister, and prayers for the progress and prosperity of the brotherly people of the Islamic Republic of Pakistan.