Malala’s statement is being shared out of context, Ziauddin Yousafzai

Pakistan selected as a member of IAEA's board of governors

Malala’s statement is being shared out of context, Ziauddin Yousafzai

Karachi: Ziauddin Yousafzai, Pakistani education activist and father of Nobel laureate social activist Malala Yousafzai, has said that his daughter’s statement regarding marriage is being shared out of context of the interview.

Ziauddin Yousafzai, in response to a question asked by Mufti Shahabuddin Popalzai on Twitter, said that the media and social media were misrepresenting his daughter’s statement.

Mufti Shahabuddin Popalzai had asked Malala Yousafzai’s father regarding a rumor circulating on social media since yesterday. He said, “A news report has been making the rounds on social media since yesterday that your daughter Malala Yousafzai has categorically rejected the institution of marriage and said that ‘partnership’ is better than getting married,”

“We are all deeply disturbed by this statement. Please explain,” he added.

Replying to Mufti Shahabuddin’s tweet, Malala’s father said that her interview was twisted out of context with sinister intentions.
“Respected Mufti Popalzai Sahib, there is no truth in it. The media and social media have taken an excerpt of her interview out of context and shared it with their own interpretations. And that’s it,” Ziauddin wrote on his verified Twitter account. 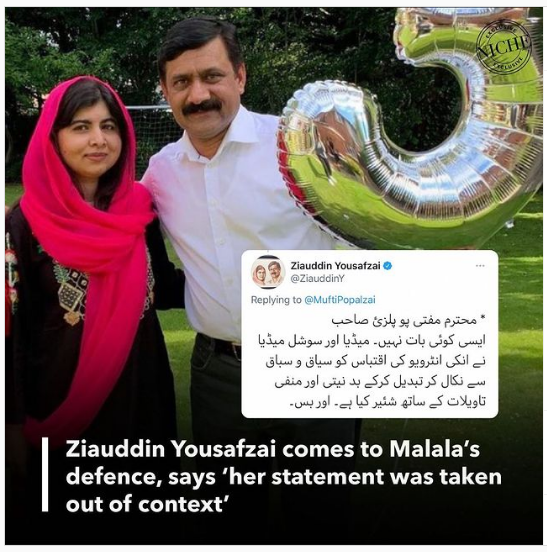 The annual meeting of FCCI will be convened on Sept 30, 2021

Faisalabad: The annual general meeting of the Faisalabad Chamber of Commerce and...