A case has been registered by the Lahore police against Mufti Aziz Ur Rehman, who’s been accused of sexually abusing his seminary student, his sons and two unidentified persons.

According to media reports, the case was registered against Mufti Aziz Ur Rehman on the student’s complaint when police arrived at his local madrassa in Lahore after the video went viral on social media.

The case has been registered at the North Cantt police station on the complaint of S* under Section 377 (unnatural offences) and Section 506 (punishment for criminal intimidation) of the Pakistan Penal Code.

The victim said that during the exams, Mufti Rehman had accused him and another student of cheating by getting someone else to sit for the exams.

“Over this, I was also banned from giving exams at the Wafaqul Madaris for three years,” he said in the complaint.

Also, the victim said he complained to the madrassah’s administration but they refused to believe him as Mufti Rehman was an “elder and a pious man”.

The Jamiat Ulema-e-Islam’s vice ameer and religious cleric Mufti Aziz ur Rehman is under fire after his leaked video, sexually assaulting one of his teenage students went viral online.

The heinous act, which took place on June 15, by Rehman showed him sexually abusing a Jamia Manzoor Islamia madrassa student.

However, the viral video has sparked extreme outrage by the JUI-F lawmakers, parents and other religious scholars. The institute itself has issued a notice against the Mufti.

“I Was Intoxicated,” says the Cleric

Mufti Aziz, whose membership has been suspended by his party, also released a video statement not only denying his role in the viral video but also claiming that “it is part of a conspiracy to malign his reputation”. 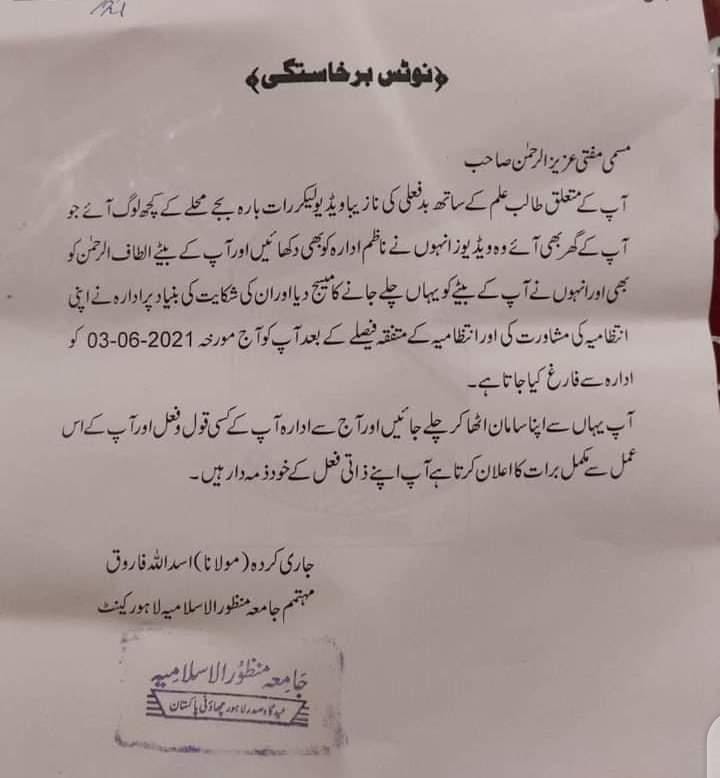 The cleric claimed, “Certain elements inside the seminary wanted to expel him.”

“This video is fake as you can’t even see me move in it,” he added.

“Where is my accuser? It has been two weeks since he was last seen…I was clearly drugged by this boy,” he detailed further.

This news story has originally been reported and covered by BOL’s senior anchorperson, Jameel Farooqui.

Govt urged for steps to manufacture solar panels in Pakistan