This 19-year-old Twitter user redesigned a cover of singer Katy Perry’s upcoming fifth studio album “Smile”. The teenage artist got a shout out from popular figures, including the artist herself.

The album’s cover was officially revealed by Katy Perry last week as part of a promotional campaign, “Smile” is expected to be released on 14th August. The cover featured Perry in blonde hair with a clown nose. 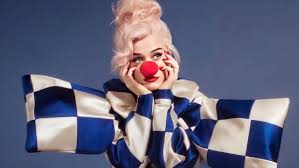 The teenage internet user redesigned the cover and got feedbacks from Perry’s fans. Twitter users compared both the redesigned image and the original cover.

Teenage named Peter (Twitter username: Famekilled) told the international news source, “I actually wasn’t planning to make a ‘Smile’ cover redesign, but once I saw the hint of clown and circus visuals, I saw a potential and immediately imagined what it could’ve been on a bigger scale,” “Once I started putting it together, it came along so well, so it took me about one or two days.”

His twitter account has over 7,400 followers. Peter has been around on “stan Twitter” in some variety since 2015.
He shared his work on Friday. Till now, it has been retweeted more than 12,000 times and received over 80,000 likes.

This is so good!

oh my GODDDD @katyperry change the cover to this!!!!!!!