Pakistani TikTokers Ali Khan Hyderabadi and Alishbah Anjum got into the craziest fight. Their fight is considered one the biggest fights ever witnessed between people sharing the same profession.

Ali Khan Hyderabadi had earlier humiliated a dark-skinned girl after he invited her on his Instagram live session. He asked her to clean her face to appear ‘clearer’. He was accompanied by a child during the session. He allegedly said in the live session, “darr raha hai thora, aap camera saaf karo.” (clean your camera as they are scared).

Soon after the video went viral on social media, many from the TikTok fraternity felt ashamed of him, on the other hand, many came forward in support.

However, TikTok star Alishbah Anjum, who is the sister of the most followed TikTok star Jannat Mirza, couldn’t stand Hyderabadi’s inhuman behavior and bashed him on social media publically.

Alishbah Anjum went on to say that this happens when you make “Jahil” people famous. 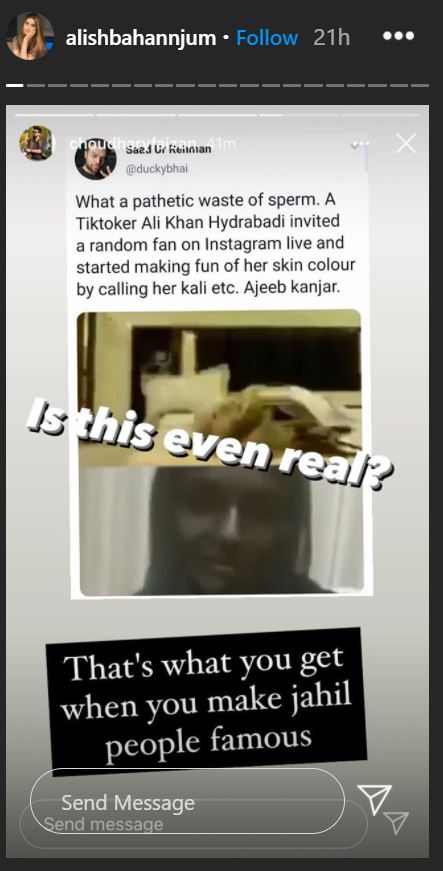 Ali Hyderabadi confronted Alishbah and said she is unaware of the whole situation. He shared a screenshot of their conversation in which he told her that he respects her and Jannat.

To which Alishbah replied she cannot support a wrong act. She further said that she has watched the video and it has made her regret every time she had supported Ali Khan Hyderabadi.

Ali Khan Hyderabadi, instead of ending the fight, dragged it more and called Alishbah’s reaction as a publicity stunt to gain more followers.

He later claimed that Alishbah is jealous of his success and using his name to get famous.

To put an end to the drama, Alishbah did not give any reaction and finished the conversation by adding a smiley.

ISLAMABAD: Federal Minister for Finance and Revenue Shaukat Tarin has said that...