Why Mia Khalifa Is Eating Pakoray, Gulab Jamun and Everything Veg?

The ongoing months-long farmer protests against Prime Minister Narendra Modi’s agricultural reforms. For more than two months, thousands of farmers have blocked all the roads leading into New Delhi.

Earlier week, the Indian farmers held a tractor rally that turned violent in New Delhi. In response, police have shut down the internet, dug ditches, put driving nails into roads, and topping barricades with razor wire to stop farmers from entering the capital city.

She first raised her voice on Feb 3rd for the farmers. Many Indians including Bollywood star Kangana Ranaut criticized the former adult movie actress.

“Paid actors,” huh? Quite the casting director, I hope they’re not overlooked during awards season. I stand with the farmers. #FarmersProtest pic.twitter.com/moONj03tN0

Since then, Mia has been very active on Twitter shedding light on the ongoing Farmers protests. Many new allegations were made on the celebrity, however, she did not stop her support and took all the criticism with open arms.

Omg why didn’t I think of this before I wasted all my humanitarian propaganda money on printer ink 😩 https://t.co/LHiz55pshU

Her tweet proved that Mia is a savage and will be supporting the Indian farmers till her last.

Shoutout to the farmers 👩🏽‍🌾 pic.twitter.com/0w95qVjUL1

Thank you @rupikaur_ for this beautifully harvested feast, and thank you @theJagmeetSingh for the Gulab!!! I’m always worried I’ll get too full for dessert, so I eat it during a meal. You know what they say, one Gulab a day keeps the fascism away! #FarmersProtests pic.twitter.com/22DUz2IPFQ

Bollywood actress Kangana Ranaut, who is a Modi supporter, backfire at Rihana and called the protesting farmers “terrorists” and the singer a “fool”. She also called Greta a “dumb and spoilt brat.” 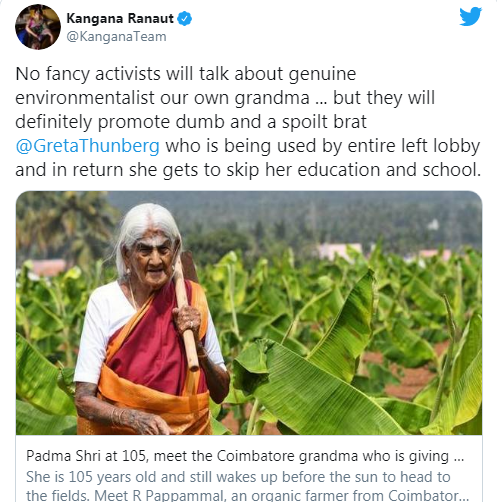 In India, several accounts linked to the Farmers protester on the social networking site Twitter were shut down over the past two months.

According to India Today, most of the closed accounts belong to Kisan Ekta Morcha and Caravan India, which were apparently shut down after the Indian government sent a legal notice to Twitter.

The report further said that Twitter had received a legal notice to block several Twitter accounts belonging to farmers’ organizations, workers, and media groups who were tweeting against the three farm acts.

In this regard, Indian officials said that Twitter was asked to block more than 250 accounts or remove tweets that used specific hashtags.

According to Indian officials, the Ministry of Information Technology blocked about 250 tweets and Twitter accounts using the hashtag #ModiPlanningFarmerGenocide and making fake, threatening, and provocative tweets on January 30.

Farmers went on a hunger strike a few days after violent protests between protesters and authorities against agricultural laws led to the closure of internet services in and around New Delhi.

During the violent protests on the Republic Day of India, some elements hoisted the Khalsa flag on the historic Red Fort, where at least one person was killed and hundreds were injured.

Farmers have been calling for the government to withdraw the new law, calling it beneficial for large corporate and private sector buyers, and have been camping on the outskirts of New Delhi for two months in protest.

Mum slammed for naming daughter after favorite strain of cannabis

A woman has been criticized online for naming her daughter after her...

Karachi Kings’ Skipper Imad Wasim and Sania Ashfaq have been blessed with...

An emerging model Maria Furqan has been criticized several times for flaunting...

Former Australian Player Steve Smith has expressed his desire to be a...

A man threatened to commit suicide by blowing up the house with...