Speaking at a press conference at Gaddafi Stadium in Lahore, Bisma Maroof said that Bangladesh’s team is Asian champion and that would make the competition tough.

“Holding an international series in Pakistan is very important. We want to play as many matches as possible so that our rankings get better,” said Bisma.

She added that both the batting and bowling sectors will be given priority while former captain Sana Mir will not be part of the team in the first match.

Bisma Maroof said that there was a shortage of backup players, we have to bring improvement to our team.

Talking about Nida Dar, said that it is a good thing that Nida has gone to the Big Bash League but domestic cricket should be given first priority.

On the other hand, Salman Khatoon, captain of the Bangladesh Women’s Cricket Team, said at the conference that we are thankful to the Pakistan Cricket Board as they invited us, we are much excited to play in Pakistan. 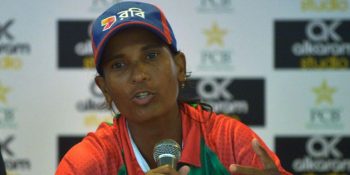 She further said that the series against Pakistan will prove to be good for the World Cup. We will try to improve our ranking by winning the series.

She also added that Pakistan is considered one of the best countries in Asia, and hopefully the bilateral relations will also get improve through the Women series.