Pakistani cricket fans has celebrated their wedding by watching the second Australia vs. Pakistan T20 match.

For the love of cricket, a US-based Pakistani sent a fan message to the International Cricket Council on Wednesday.

Hasan Tasleem said in his message to ICC, he couldn’t miss a Pakistan cricket match — even on his wedding night.

“Hello, as a diehard cricket fan, I wanted to submit a photo from my wedding this past weekend,” Hasan Tasleem said in his accompanying note to the ICC.

“As per tradition, after the completion of the wedding, the bride is brought back home for a little traditional welcoming ceremony amongst the close family.

“As we came home (around midnight in Detroit, Michigan, USA) the Pakistan vs Australia T20 game was getting underway.

“Over the years residing in North America I’ve stayed up at all sorts of odd hours of night to catch Team Pakistan play.

“Even though it was my wedding night, I wasn’t going to miss this game.”

This is a note to ICC from Hasan Tasleem, a cricket fan 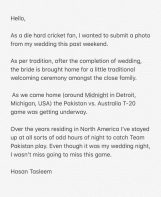 ICC tweeted it with the hashtag couple goals,

You know it's love when … pic.twitter.com/4YuGImuXjW

Haha glad I played such a special part in your day!! 😂😂
Take note @_AmyFinch https://t.co/MbG4YGJad8

Aaron Finch further went on to tag his wife, Amy Finch, in a humorous attempt to have a similar relationship with cricket.