According to the ranking, none of Pakistan’s players managed to make it to the top ten in the batting and bowling sector, Nida Dar is on rank 7 in the all rounder category.

Australia is on number 1, England is second, New zeland is third, India is fourth West indies is fifth and South Africa is on sixth rank.

Pakistan is on rank six while Sri Lanka, Bangladesh and Ireland are on rank eight, nine and ten respectively.

None of Pakistani player scored a position in the top ten whereas Bisma Maroof is on rank 11 and Jawaira is on 19th rank.

There are now three Indian bowlers in the top five as left-arm spinner Radha Yadav has moved up from fifth to second. Deepti Sharma. 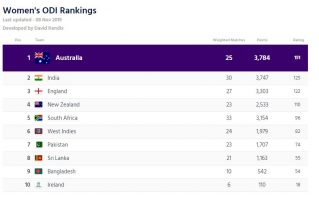 For the West Indies, Shemaine Campbelle has progressed three places to 68th among batters while spinners Hayley Matthews (up nine places to 27th) and Anisa Mohammed (up two places to 45th) have advanced in the bowlers’ list.

Pakistan’s frontline batter Javeria Khan has moved into the top 20 with 111 runs against Bangladesh, which included two half-centuries, while Umaima Sohail has moved up to 64th. Among bowlers, Anam Amin (up 16 places to 12th) and Diana Baig (up 29 places to 63rd) are the notable gainers.

For Bangladesh, Sanjida Islam has gained 11 slots to reach 75th position among batters while Jahanara Alam has gained 22 slots and is now in 15th place.

In the team rankings, India have gained eight points to move up to 260 and fourth position while the West Indies are now fifth at 248 after losing 10 points. Thailand, who have qualified for the ICC Women’s T20 World Cup 2020 in Australia, are in 11th position, four points behind Ireland. The full table is available here. 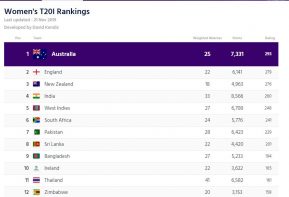 Dominic Thiem Pulls Out Of Wimbledon As he Suffered Wrist Injury

Austria’s Dominic Thiem has announced his withdrawal from Wimbledon due to a right...

Punjab government is all set to implement single curriculum in all schools...

District and Sessions Court Peshawar has sentenced the main accused in the...