Muslim convert Sonny Williams opens up about his journey to Islam

The rugby star stated that he had much fame, money and bright future a few years ago, but despite that he was an unhappy man.

While giving an interview to British media, Williams told that some people want me to be ashamed of accepting Islam, but I feel proud that I have found a right path.

Muslim convert Bill Williams spoke about what the religion means to him, how he has struggled with acceptance in society, the toll the Christchurch attack has taken on his family and how special it was to have his mum Lee accept the Islamic faith alongside him.

Williams revealed that it was when he was living in Australia and playing league for the Bulldogs that he first learned about Islam. 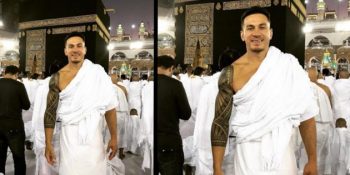 WIlliams also opened up about how much it meant to have his mum convert to Islam in the week after the Christchurch mosque terror attack.

“It was very very special,” he said as he wiped away his tears.

“That’s the beauty of Muslims is that we see this dunya (world) as an attachment. We’re just passengers passing through and In Sha Allah (God willing) we stand in Allah’s grace. And that’s been my mindset for years”, said Sonny Williams.

The remaining matches for Pakistan Super League (PSL) 2021, which was abandoned...

As the entire Muslim Ummah is celebrating the joyous occasion of Eid...