Acting UK High Commissioner was present to witness the match. 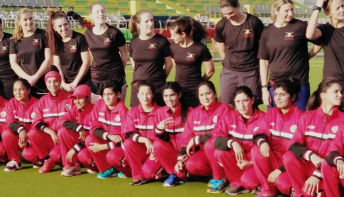 Meanwhile, the Army Chief met with players from the Army teams participating in the National Games in Peshawar.

The team is scheduled to play against Pakistan’s women teams Army, WAPDA, Railway as well as the national team.

The British team will play against WAPDA, Railway and National Women’s Hockey team on November 21,22 and 23 respectively.

Dominic Thiem Pulls Out Of Wimbledon As he Suffered Wrist Injury

Austria’s Dominic Thiem has announced his withdrawal from Wimbledon due to a right...

Sindh Assembly Approves Budget 2021 Amidst Ruckus By The Opposition

Sindh Assembly has on Friday approved the provincial budget for the fiscal...

Asad Umar Warns Of Fourth Wave Of Coronavirus In Pakistan

Federal Minister and head of the National Command and Control Center (NCOC)...