Regarded as one of the finest and a star player of football, Barcelona’s forward Lionel Messi has made his country proud once again for winning the Ballon d’Or award for the record sixth time.

He was awarded the title, at Theatre du Chatelet in Paris; just after the day when he scored a magnificent winner against Atletico Madrid to go top of La Liga.

He now surpasses Cristiano Ronaldo to become the all-time winner of the coveted award.

This win for the Barcelona Star means the Ballon d’Or award has been won by a player from Spain’s La Liga in each of the last 11 years, including last year’s winner Luka Modric, who broke the 10-year Messi-Ronaldo monopoly on the prize.

Messi, of course, was quite delighted at the moment, and expressed his utmost gratitude to his fans, all around the world, who love to watch him play and score always better than before.

Upon receiving award, The Argentine’s valuable asset said that “Today is my sixth Ballon d’Or. It’s a completely different moment, lived with my family and my children.”

He said that “As my wife said, you must never stop dreaming but always work to improve and continue to enjoy. I am very lucky, I am blessed.

He added that “I hope to continue for a long time. I realize that I am very lucky, even if, one day, retirement will ring. It will be difficult.”

Messi said that “But I still have beautiful years ahead of me. Time goes very quickly, so I want to enjoy football and my family.” 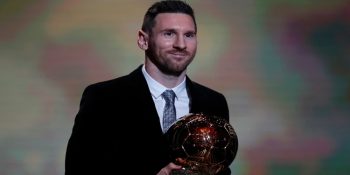 As per the goal data records, The Barca’s forward recently notched up 700 appearances for Barcelona, during which time he has scored a phenomenal 614 goals while winning 34 trophies, including 10 La Liga and four Champions League titles, and a host of other records and awards.

Virgil van Dijk was second – one of four Liverpool players in the top seven, including Sadio Mane in fourth.

Juventus and Portugal forward Cristiano Ronaldo, who has won the award five times, was third in the voting.

Lionel Messi and Cristiano Ronaldo have millions of fans worldwide. They are without a doubt the two best footballers of their generation while playing the most popular sport on the planet.

There are many opinions as to who is a better player, and both sides have pretty good arguments. But who is more loved and who has more fans?

As Messi wins the award, an announced war started between the fans of both footballers.

#BallonDor2019 is also on the top trends.

Many of Ronaldo’s supporters are treating Mess’s win as a scam while on the other hand, fans who support Messi, arguing the ‘deserved has got the best’

So Lionel Messi "deserves" to win the Ballon d'Or only winning a single trophy.

*Didn't win the ballon dor…..I'm not saying France football writers are corrupt, but just give reasons why it was given to Modric!#BallonDor2019

ICC Player of the Month awards introduction was announced today by the...