Serena Williams hit a major milestone since becoming a mom

Serena Williams hit a major milestone since becoming a mom

Tennis star, Serena Williams recorded her first win since 2017 and hit a major milestone on Sunday in her journey since becoming a mom.

Serena Williams appeared to be in high spirits over the weekend as she won her first title since she welcomed her daughter, Alexis Olympia, in 2017.

“It feels good. It’s been a long time. I think you can see the relief on my face,” Williams said after defeating fellow American Jessica Pegula 6-3, 6-4 at the ASB Classic in Auckland, New Zealand.

Williams’ daughter was in the crowd to watch her mom win, taking it all in while sitting on the lap of her dad.

A first title in three years for @serenawilliams !

“She’s so fun,” Serena Williams said about Alexis. “I’m a little biased but she’s so cute.”

Williams’ last tournament win was the 2017 Australian Open, when she was in the early weeks of her pregnancy. 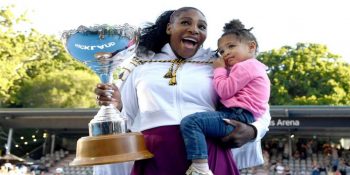 Williams has been public about the life-threatening medical complications she faced after giving birth to Olympia in September 2017.

She has honest with the struggles she faced balancing motherhood with her tennis career.

She fought for rights as a new mom, including securing seedings at tournaments after maternity leave.

KARACHI: The Federal Board of Revenue (FBR) on Friday formally launched the...

KARACHI: The businessmen on Friday rejected the decision of the Sindh government...

LAHORE: The country’s textile sector is in a macro sweet spot, amid rampant...

LAHORE: Taking a landmark initiative, the Punjab Government has established University of...