Quetta Gladiators manged to score 148 runs at a loss of five wickets in the first match of the Saturday.

Jason Roy scored 73 runs for the Gladiators from 57 balls not out and Sarfaraz departed after scoring 41 runs by Zalmi Skipper Derren Sammy, they both were the stand out batsmen for Gladiators.

Shane Watson managed to score only eight runs from 10 balls before being sent back to the pavilion by Wahab Riaz.

Kamran Akmal opening Batsmen of Peshawar Zalmi smashed the 1st century of the PSL 2020 to bring his team in the driving seat of the match against their arch rivals Quetta Gladiators.

Kamran Akmal the most dangerous player of Peshawar Zalmi, scores his third century of the PSL 2020  in just 54 balls.

Quetta Gladiators gave a target of 149 to Peshawar Zalmi to win the match.

Quetta Gladiators gave a target of 149 to Peshawar Zalmi to win the match.

The predicted score for Quetta Gladiators is 154

Peshawar Zalmi has won the toss and has decided to field first against the defending champion Quetta Gladiators at the national stadium Karachi. The match will begin at 3 pm. 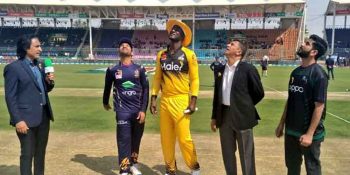 On the other hand, Multan Sultan will play against Islamabad united at Gaddafi stadium Lahore. The match will begin at 7 pm today.

Peshawar Zalmi had won the toss and had decided to field first.

Karachi Kings had set 202-run target against Peshawar Zalmi in the first innings.

Chasing the massive target, LS Livingstone remained not out with 54 runs on 29 balls. Kamran Akmal could only make 43 runs on 26 deliveries. He was bowled out by Delport.

Jordan and Umaid Asif clinched two wickets each, whereas, Amir and Delport got one wicket each.

On the other hand, Multan Sultans beat Lahore Qalandars by 5 wickets yesterday at Gaddafi Stadium Lahore.

Multan Sultan had won the toss and had decided to field first.

Lahore Qalandars managed to score 138 runs in 20 overs. However, Sultan chased the target well and made 142 runs in 16.1 overs.

Peshawar Zalmi owner Javed Afridi revealed that his team’s skipper Darren Sammy will soon get the honorary citizenship of Pakistan.

He emerged as a celebrity in Pakistan after he started playing Pakistan Super League (PSL).

One of the international players, Sammy, accepted to play in Pakistan when the country came under pressure due to attack on Sri Lankan team.

He is currently in Pakistan to take part in PSL 5.

Javed Afridi revealed that an application for the citizenship of Sammy sent to the table of President Arif Alvi.