The tournament will kick off with a clash between hosts New Zealand and a qualifier on February 6, 2021.

Christchurch selected as the venue for final, where the title decider match to be played on March 7 under.

Besides Auckland, Hamilton, Tauranga, Wellington and Dunedin will host the games.

The two semifinal matches to held at Tauranga and Hamilton on March 3 and March 4 respectively.

Three knockout games of the tournament will have reserve days, something that was not the case in Australia last week during the just concluded 2020 ICC Women’s T20 World Cup. 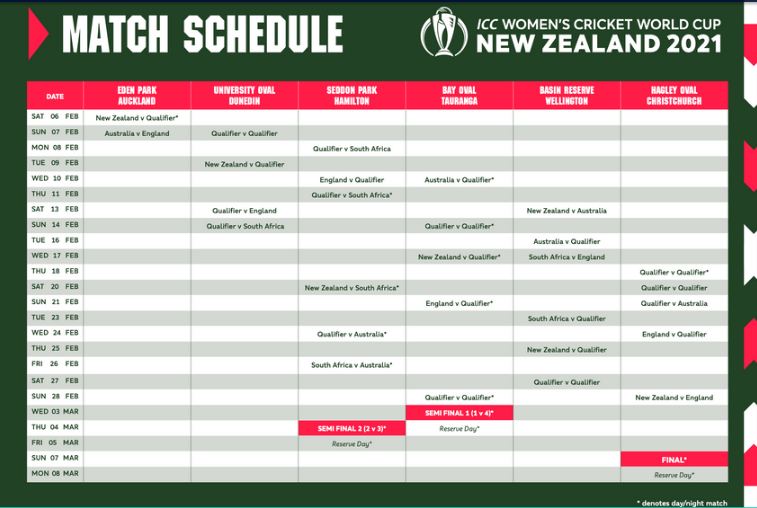 The remaining teams confirmed following the conclusion of the Women’s Championship and the qualifying event in Sri Lanka in July.

The eight-team round robin format will see all teams play each other, with the top four teams qualifying for the semi-finals.

Prize money for the showpiece event of women’s cricket total NZD $5.5million, and all matches broadcast live to a huge global audience.

ICC CEO, Manu Sawhney said: “The ICC has made a long-term commitment to to elevating women’s cricket as part of our strategy to grow and develop the global game.

Opener Healy blasted 75 from just 39 balls including three successive sixes while Mooney’s 78 off 54 balls helped the home side post 184-4 from their 20 overs.

Having won the toss and opting to bat, Australia’s openers set the tone from the outset with Healy smashing four off the first ball of the innings.

Multan Sultans sets a target of 170 runs for Lahore Qalandars in...