And when The Indian Skipper is facing heavy criticism after whitewash in Test Series against New Zealand, Mitchell Johnson found a great opportunity to troll him.

India suffered a whitewash in the recently concluded Test series against New Zealand.

There is no doubt over the fact that the BlackCaps outclassed the visitors with sheer dominance.

India suffered a defeat by a margin of 10 wickets in the series opener followed by their next defeat in Christchurch by seven wickets.

Meanwhile, Virat Kohli also heard saying that, “Jab India mein yeh log aayengey, tab dikha doonga (When they will come to India, we will show them).” This statement came after India suffered a defeat in Christchurch game.

He updated a story with a screenshot of the same news and wrote, “This gave me a laugh.” 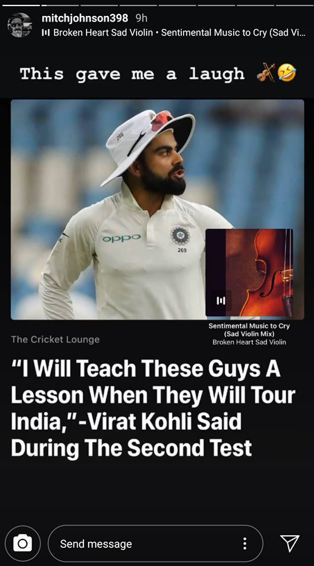 Earlier New Zealand grappled a 2-0 series whitewash of India, winning the second test by seven wickets, in two and a half days at Christchurch’s Hagley Oval on Monday, chasing down 132.

New Zealand secured their fine test record at home, undefeated in 13 tests on home dating back to the 2016-17 summer.

Black Caps were 46-0 at lunch and with Mohammed Shami off the field having sustained an injury while batting.

Latham backed up his 52 from the first innings, making the exact same score.

He gloved through to wicket keeper Rishabh Pant off Umesh Yadav with 29 left to win.

Moreover Blundell knocked over by Jasprit Bumrah for 55 – locking up his test opening spot for the Bangladesh tour and beyond.

Skipper Kane Williamson failed for the second time in the test with the finish line in sight. He gloved to gully off a ripper from Bumrah for five, to go along with three from the first innings.

Peshawar Zalmi elected to field first after winning the toss against Karachi...

Karachi Kings will try hard to avoid being pushed on the edge...