Revealed: Khabib will take on Gaethje on October 24 this year

According to reports, Conor McGregor and Khabib Nurmagomedov’s comments on Joe Rogan’s latest Instagram post revealed that Khabib is all set to fight Gaethje on 24th October.

He captioned it: “It would be impossible for me to be more more excited about this fight. 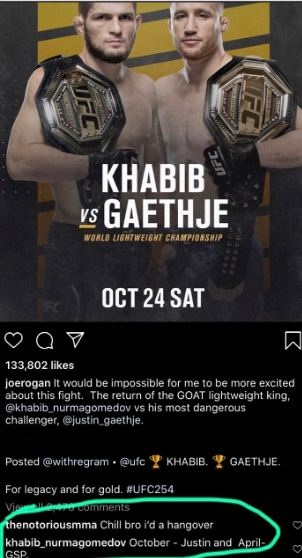 Earlier It was revealed that Muslim Mixed Martial Artist Khabib Nurmagomedov vs Tony Ferguson will take place despite fears that the Ultimate Fighting Club fight would be cancelled due to coronavirus.

Khabib Nurmagomedov is the first Muslim to win a UFC title in 2018.

For the fifth time, Nurmagomedov scheduled to defend his title against Tony Ferguson on April 18, 2020, at UFC.

As of June 30, 2020, he is #11 in the UFC men’s pound-for-pound rankings and is the current interim UFC Lightweight Champion.

Despite his wrestling background, Gaethje rarely looks for takedowns and known for his aggressive stand-up fighting style.

Furthermore, he has finished 19 of his 22 wins by knockout or technical knockout and has received five Fight of the Night and four Performance of the Night awards in his seven fights in the UFC.