Azhar replaced Sarfaraz Ahmed as captain of Test cricket last year. Azhar’s captaincy credentials and performances with the bat were a point of concern and were questioned by cricket experts in Pakistan’s recent tour of England.

Losing a test match against England after being in a strong position to win the match, Wasim Akram raised concern over Azhar’s captaincy. Being a part of the PCB’s cricket committee, Wasim Akram raising doubts would definitely change the captaincy.

It is reported that PCB CEO Wasim Akram met Azhar Ali recently as part of his yearly appraisal. Final decision on the matter will be made by PCB Chairman, Ehsan Mani which we will come to know of in the coming weeks.

Performances of the previous five captains: 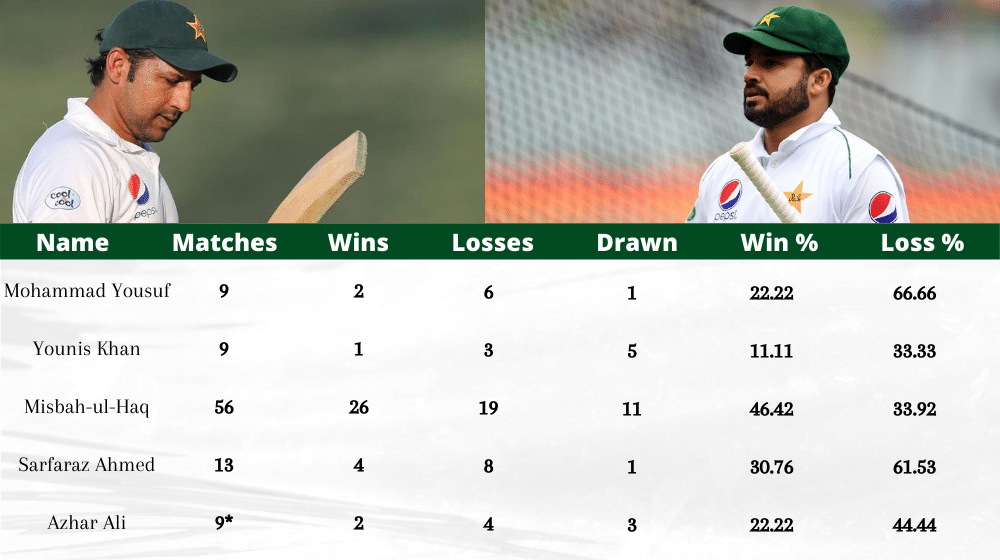 Shoaib Malik, Shahid Afridi and Salman Butt served as captains for a short while hence their names are not listed in the data.

Babar Azam and Mohammad Rizwan are two potential competitors to serve the role of captain. Babar is the backbone of the Pakistan batting line-up in all three formats and captain of the limited-overs sides. He was also named as Azhar Ali’s deputy in Tests, making him an obvious choice. PCB is hesitant to add the pressure of test captaincy on his shoulders.

Rizwan has recently established himself as the wicket-keeper in Test and ODI squad. His place in the T20 awaits to be filled. Coming to the national side after a long wait, his displays have helped him to come to the discussion of the next Pakistan Test captain.

In the series against England, Rizwan was named as the man of the series for his outstanding batting and his world-class wicket-keeping. Not very long ago, he led Khyber Pakhtunkhwa to the National T20 Cup title, being praised for his batting, fielding, wicket-keeping and captaincy.

It will be enthralling to see who’s the next test captain PCB chooses for the national side. Both choices are praiseworthy, but as we know, nothing can be known for sure in Pakistan Cricket.

The Pakistan Cricket Board has confirmed that a player was approached by...