Daniil Medvedev takes down the World No. 1 Novak Djokovic

Daniil Medvedev takes down the World No. 1 Novak Djokovic

Daniil Medvedev produced a brilliant display to beat world No. 1 Novak Djokovic in straight sets, 6-3 6-3, at the ATP Finals.

According to the details, the Russian Daniil Medvedev fourth seed went toe to toe with the Serbian Tennis icon, winning an absorbing contest at London’s empty O2 Arena.

Novak Djokovic can still advance if he beats 2018 champion Alexander Zverev in a winner-takes-all match on Friday.

Daniil Medvedev held serve easily in the next game and seized the opening set 6-3 when a rattled Djokovic double-faulted. 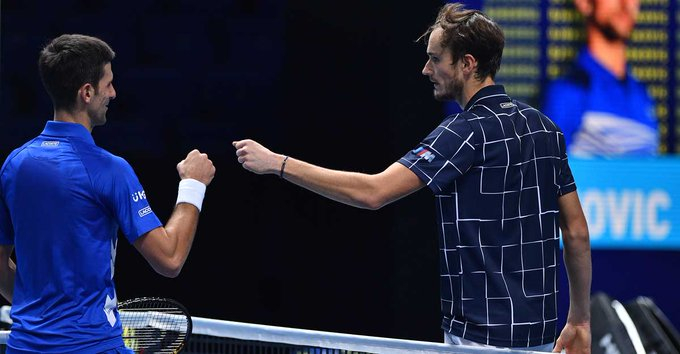 Medvedev after the game, said, “Always I like to pay Novak, first of all, because he’s one of the greatest champions in the history of our sport and when I was eight years old I was already watching him on TV winning Grand Slams.”

“He was still young — so it was always a dream come true to play against him.” He added.

In addition to this he said “I was serving good and playing safe enough in the most important moments and that’s why I got the win,” added the Russian, who lost all three of his matches on his debut last year.”

The decisive Zverev-Djokovic match on Friday will be a rematch of the final from two years ago when the German won in straight sets.

Commenting about the match, Zverev said “I’m happy to give myself a chance to go to the semifinals,”

“I need to win every match, otherwise I’m out, so I’ve got to go in with that mindset. I went to that mindset today, and I did my job.”

KARACHI: After over two decades, the Karachi Port Trust (KPT) is conducting...