Famed British boxer Amir Khan has recently appealed for prayers for his mother as she has pancreatic cancer.

Amir Khan, 34, announced that his mother has tragically been diagnosed with cancer. He asks his fans to pray for his mother. 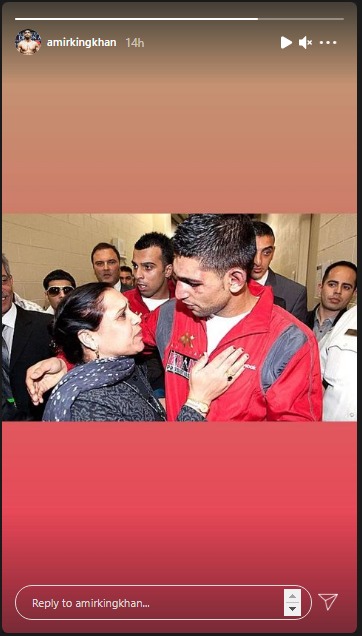 He shared the sad news with his fans and followers on Instagram alongside a picture of him and his mother Falak.

Former world champion wrote: “My dear mum has been diagnosed with pancreas cancer, stage 4. Today she’s feeling a lot better and stronger. Please keep her in your prayers.”

Amir’s father told: “We only found out last Thursday and we just want everybody to pray for Falak. She is a strong woman, a fighter and with Allah’s guidance she will pull through this.”

His father, Shah further added,”The family have been very supportive, and the NHS have been amazing in these very difficult times. Amir is currently isolating as he’s just returned from Dubai, but he has been Facetiming his mother every day and giving her all the support, she needs.”

“God willing, she will recover. Falak has got all the family around her, they are constantly on the phone to her and we are giving her all the support she needs. We are with her all the way,” he said more.

However, in response to Amir’s Instagram post, fans reacted with a series of moving messages, with one declaring: “In my prayers champ…”Another said: “Lord bless her and help her have a quick recovery Ameen.”

Moreover, The renowned boxer is also a known philanthropist. He works for many causes around the world including Pakistan.

He also runs a boxing academy in his name in Islamabad. In early October 2020, the boxer hosted a rare pro-boxing night at his facility. It featured local and international talent.

British Muslim boxer Amir Khan on the occasion of Eid-ul-Fitr has shared...