After a tonne of criticism and trolling over the official anthem of Pakistan Super League (PSL) 6, singer Meesha Shafi came forth to call out those bashing the song.

Responding to all the negative comments, Meesha Shafi took to Instagram to weigh in on the controversy.

“Over post-colonial inferiority complex and a rigid system that favours only a selective few repeatedly,” she remarked, raising the curtains on the nepotistic ways some brands and platforms embrace Pakistani artists,” the singer added. 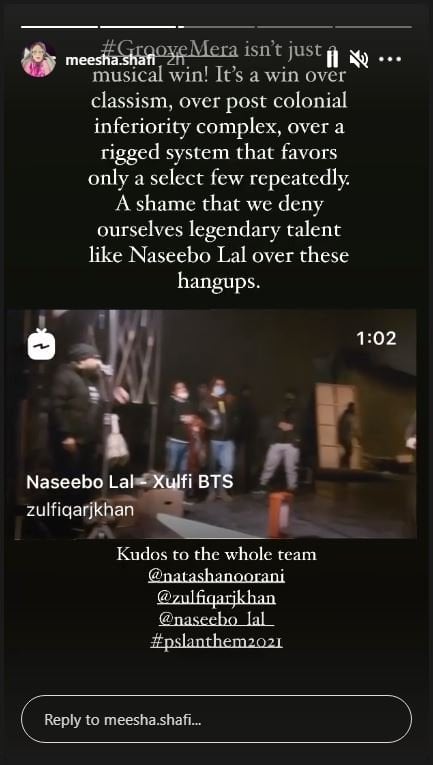 “A shame that we deny ourselves a legendary talent like Naseebo Lal over these hang-ups,” added the Bijli Aye Ya Na Aye crooner. “Kudos to the whole team,” Shafi concluded.

The sixth season of the Pakistan Super League (PSL) begins a few...

Earlier, Shoaib Akhtar lashed out at PCB for releasing “the worst song that he had heard in the history of the PSL”.

“If the 10 worst songs of the PSL are compiled, this song will be number one,” said the former pacer. “Do you have any shame?”

He mocked the new song by joking that ever since he played it for his children, they have stopped talking to him. “My kids are scared of this song. When they don’t sleep, I tell them I’ll play it for them. That immediately scares them,” he said.

However, Pakistani Twitterati was quick to respond Akhtar for his insensitive remarks about the artists’ struggle.

“Really disappointed in u. The song is not bad at all. Just cuz u didn’t like it, doesn’t mean u have the right to put efforts of singers n producers in the trash,” one user said.

Tech giant Apple may launch its first foldable IPhone in 2023

Tech giant Apple has been rumored to be working on a foldable...